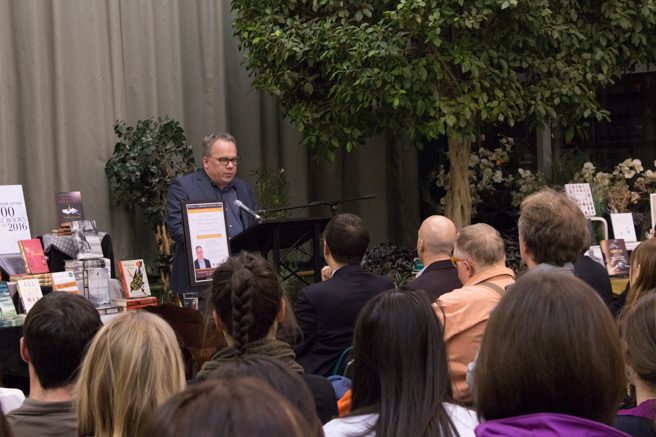 The Trudeau government will have a tough balancing act ahead of them when it comes to relations with the Trump administration, according to political commentator and Toronto Star columnist Paul Wells.

Delivering the keynote address entitled “A Trudeau Government in a Trump World” for the J.W. Dafoe Political Studies Students’ Conference on Jan. 25, Wells discussed the challenges ahead for the Trudeau government in maintaining a progressive social agenda while keeping Canada’s economic relationship with the U.S. strong.

Wells outlined the efforts the Liberal government has already made to prepare Canada for a large shift in American domestic and foreign policy under the leadership of Donald Trump in his speech to a packed atrium at McNally Robinson Booksellers.

Pointing to meetings between Canadian government officials and Trump transition team members at Trump Tower in New York City in early January, Wells said that the scale of effort the Trudeau government is making to keep Canada-U.S. relations positive, avoid provocation, and safeguard Canada’s position in the North American Free Trade Agreement (NAFTA) has been “huge.”

Speaking with the Manitoban following his speech, Wells discussed Canada’s strong economic position in the event of any possible renegotiation of NAFTA or significant change to American economic policy.

“It’s true that our economies are tightly integrated. There are American jobs that depend on trade with Canada,” Wells said. “That’s a case you can make that I think [the Trump administration] will understand.”

Wells went on to discuss the political cost Trudeau will have to pay at home in maintaining a working relationship with the new U.S. administration.

“[The Liberals] are telling themselves that there’s a bigger game, which is that even when Trump is president, there are Canadian jobs that depend on the United States. And after Trump is done being president, we don’t want the relationship between our two countries to be a smoking crater.”

On Jan. 26 – the day after Wells’ address – Trudeau’s ability to balance Canada’s economic interests and the prime minister’s social values were tested when he stopped in Winnipeg for his 10th cross-country town hall event at the University of Winnipeg.

During the town hall, two fourth grade students worried about the businessman-turned-politician’s rise asked Trudeau if he would “save Canada” from the new president.

“[Canadians] expect us to ensure stability, prosperity, opportunity that comes with the important trade relationship we have,” Trudeau answered. “Trade with the United States is an essential part to our success.”

“We have to have a constructive, working relationship with the new administration and that’s exactly what I’m focused on. But Canadians also expect for us to stand up loudly and strongly for the values that make us Canadians,” he said. “Openness, diversity, respect, rights. We are going to be focused on the future of our country, making sure that we are ensuring that Canada stays Canada and that Canada stays prosperous.”