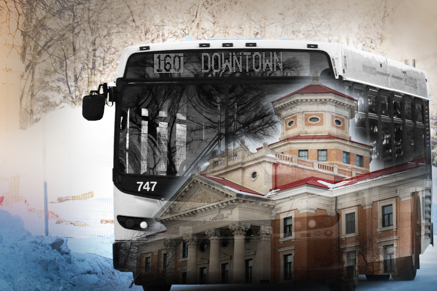 The University of Manitoba Students’ Union (UMSU) is claiming Winnipeg Transit reneged on a commitment to support an operating grant to offset U-pass administrative fees, leaving the union on the hook to absorb a projected $60,000 in associated costs.

In a release issued in December, the student union accused Winnipeg Transit of failing to negotiate in good faith and criticized the mayor’s executive policy committee for its “shortsighted refusal to work with students.”

The U-Pass is a universal transit pass available to all full-time undergrad and graduate students at the U of M and University of Winnipeg for a reduced fee payable with tuition.

Administrative costs were a point of contention over the summer when the two sides negotiated terms to roll out the U-Pass for September and Pawlak said he was under the impression transit would support an operating grant to offset half of the cost of administering the pass.

He said transit agreed to support the grant request for the first two years of a four-year contract after refusing to remit the one per cent commission on the U-Pass – a standard agreement between transit and bus pass retailers.

“From our understanding, what we agreed upon was that Winnipeg Transit would support this grant within their budget and make it work,” he said, adding that he learned through email that the transit department removed a grant request for $27,000 before the budget submission went to committee.

“We were assured this grant would be supported by transit,” said Pawlak.

“I always knew that it could be defeated at the city council level but the frustration stems from the fact that transit did not support the grant in the end, because the way I envisioned it was that UMSU and transit [would be] side by side arguing the grant to the councillors and it ended up being just UMSU arguing for the grant.”

“The U-Pass is a partnership,” said Pawlak, addressing the committee. “In order to make the partnership work effectively, both parties need to work together to ensure its success for the long-term health of the city of Winnipeg.”

The request was rejected. However, Pawlak said transit representatives and UMSU are scheduled to meet this month to continue discussions.

Wardrop was not made available to the Manitoban. However, A lissa Clark, a spokesperson for the city, said in an email the request was dismissed “as part of the budget process.”

“Winnipeg Transit suggested that UMSU apply for a grant and offered to support the grant request by including the grant in the department’s budget submission as part of the 2017 budget process, but advised UMSU that there was no certainty of approval,” she said.

According to numbers Pawlak presented to the executive committee, the U-Pass more than doubled the number of U of M students with a transit pass. He said 87 per cent of eligible students claimed their pass, with more than 19,100 issued compared to close to 7,000 under the previous student rate arrangement.

In the release published on Dec. 16, UMSU claimed that the U-Pass program generated $5 million in revenue for Winnipeg Transit.

Clark challenged that claim, saying the $5 million is roughly equivalent to the sales UMSU produced through the previous student transit pass framework but noted the bolstered ridership numbers increase service requirements and in fact run the city a net loss of $1.6 million annually.

Clark also noted that a one per cent commission is provided to retail commercial outlets to offset costs including credit card fees, which do not apply to the U-Pass.

According to Pawlak, administrating the U-Pass has cost UMSU nearly $47,000 for the fall term. That number is expected to reach close to $60,000 after the winter passes are distributed.

Under the U-Pass agreement – which is between the U of M, Winnipeg Transit, and UMSU – each party is responsible for any costs incurred to meet their obligations.

To fund the U-Pass, full-time U of M students are assessed an additional fee of $260 – $130 per term – in their tuition. The fee represents a $306 savings from regular student rates for monthly bus passes and gives students access to Winnipeg Transit from September through April.

Currently, U of M U-Pass users are issued paper cards to be displayed along with their valid student cards. This has increased the administrative costs to UMSU, which had to organize and distribute the passes both in the fall and winter terms.

Students at the University of Winnipeg have been issued plastic reloadable peggo cards.

The paper passes are a temporary measure until systems are in place at the U of M to support the peggo cards.

They are expected to be available in the fall of 2017.