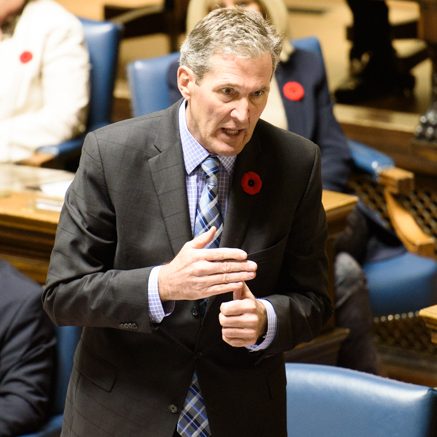 On Jan. 3, the Canadian Centre for Policy Alternatives rang in the new year with a report that showed that Canada’s 100 top CEOs earn an average compensation 193 times more than the wage received by ordinary full-time workers. In real numbers, that amounts to CEOs raking in approximately $9.5 million in comparison to Canada’s median salary of $49,510. These numbers speak to a broader trend – since the 1980s new wealth in Canada has increasingly gone to the richest among us.

Frankly, this isn’t shocking news for anyone near or below that median number. People have an intuitive sense of the unequal distribution of wealth in society. That’s why we’ve seen such resonance with politicians from the left like Bernie Sanders in the U.S. and Jeremy Corbyn in the UK, and the push to get rid of Harper in Canada.

With the broad support for a new approach to tackling inequality, is government acting to address that problem? Not in Manitoba, where the newly inaugurated Progressive Conservative government has been trumpeting an agenda of austerity.

Since taking control of government, Premier Brian Pallister has cancelled an annual minimum wage increase – costing minimum wage earners $400 this first year alone, according to Manitoba Federation of Labour estimates – while accepting a pay increase for himself and his cabinet ministers tied to Manitoba’s balanced budget legislation. Pallister has also indicated interest in opening up settled contract agreements with public sector unions.

Pallister has taken a leave of reality longer than his two-month Costa Rican vacations if he thinks people will stand by apathetically while he tears up negotiated labour contracts for the purpose of ending minute wage increases for front-line public sector employees.

This kind of anti-labour political manoeuvering by the PC government is highly representative of the party’s disregard for average people in Manitoba. Indeed, the only group that registers on this government’s radar are interest groups catering to business. A troubling disconnect exists between the people and their representatives when the latter treat the minimum wage as a handout instead of the most basic level of subsistence deemed humane by society.

Pallister’s lack of care for the layman only becomes more apparent as we get further into his government’s term. When concerns were raised about affordability in light of Bell’s bid to acquire MTS, Pallister remarked, “You get what you pay for.”

First and foremost, Bell’s promise to invest in more cell towers will not completely offset the pressures to increase prices and lower quality of customer service given the decreased competition between providers. Furthermore, it’s rich for the premier with prime property in a foreign country to be so nonchalant over the possibility of prices jumping up, especially when his government is pushing wage stagnation for thousands of workers.

Pallister’s sails can’t rely on the winds of ‘blue skies’ for much longer. Economic inequality is one of the hottest topics in modern political discourse, and it’s not going unnoticed. Abroad, the Finnish government is experimenting with universal basic income; meanwhile the Canadian economy is becoming increasingly lopsided. A report issued by the Broadbent Institute in 2014 showed that the top 20 per cent of Canadians now control approximately 70 per cent of the country’s wealth.

The Manitoban government should be in the business of looking out for the everyman – not cutting back accessibility to services, nor slashing funding and drying up wages. To justify his rampant austerity fear-mongering, Pallister warns Manitobans that “something’s got to give” when it comes to the province’s spending. But not everyone has a $2 million mansion to curl up in when those spending cuts result in lost jobs and fewer public services.

Get in the clouds