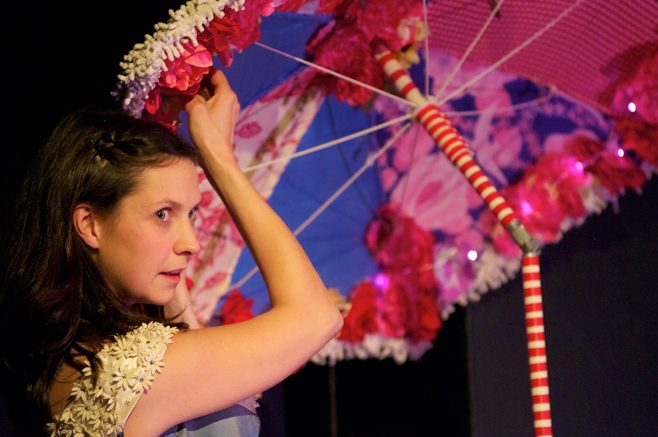 From Feb. 17 to 26, the Manitoba Theatre for Young People (MTYP) will be showcasing Mess, a play written by British performer and creator Caroline Horton. The play creatively tackles common sociocultural issues like anorexia, obsession, eating disorders, and addiction.

Though Mess is playing at the Manitoba Theatre for Young People, a venue typically geared towards children and teenagers, it is tackling issues that apply to people across all demographics. The subject matter is anorexia, an issue that most people can easily relate to by experience or knowing someone who has experienced the disorder.

In Mess, Caroline Horton takes her formal acting background and adds her own personal experience with anorexia to create a creative and captivating play. The play features three characters: Josephine, a woman in her 20s who suffers from anorexia, and her two friends. One is Boris, a male character played by a woman; the other friend Sistahl plays the music for Mess and Josephine comically interacts with her throughout the play.

Horton takes a humorous approach to tackling otherwise serious issues in her play. Mess exposes some of the deep truths of anorexia in a lighthearted manner and Pablo Felices-Luna, MTYP’s artistic director, believes this makes the play unique and entertaining.

“It’s not just the humour, but [Horton] goes to some pretty truthful places because she goes deeper and deeper, and by doing so there is a beautiful sense of humour so it doesn’t feel like the audience is here for a lecture,” Felices-Luna said.

“It’s very approachable. There are many beautiful moments where you ask, why are you laughing, but she’s inviting you to laugh at the situation. It makes it easier to explore those difficult subjects. When you find something messy, unpleasant, uncomfortable, you keep digging. It’s called picking the scab. The humour comes from going all the way.”

Mess is a piece that is done so well, it speaks to people across many demographics. Nevertheless, it is recommended for teenagers 13 and up because it has such strong subject matter. The play’s originally intended audience is much older than the MTYP’s usual audience age group, but when Horton performed Mess in the United Kingdom, she noticed that school groups were coming to the play because parents and teachers wanted to open the floor for a conversation and educate children.

“It’s smart, relevant, funny. It [is] not just for teenagers, but for me too, a 40-year-old plus man,” said Felices-Luna. “People in their 20s and 30s should see this play. It’s important and compelling work.”

Felices-Luna describes most MTYP’s plays as for people of all ages and that the “Y” in MTYP deters people from coming to see plays they assume are only intended for children. He encourages everyone to look at MTYP’s programming to find plays that are interesting and offer a good time away for friends and family.

“When the work is done right, it tells the same story, just taken in different ways. Sometimes people think the work is just for children but when we do it right, it is for everyone.”

For information on tickets and show times, visit mtyp.ca

Intimacy, efficiency and a lot of windows