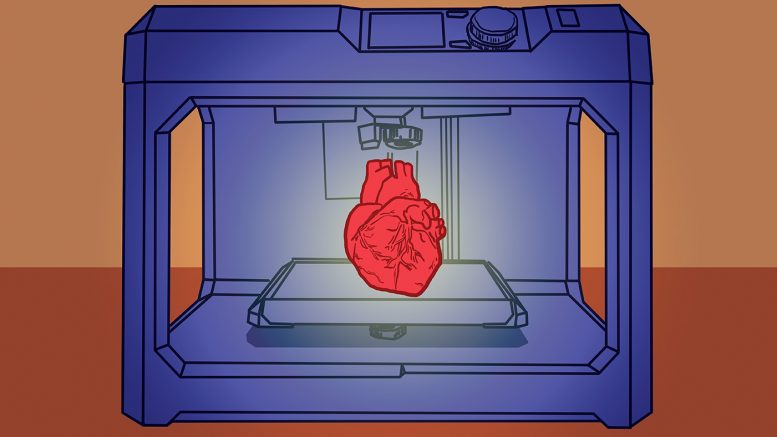 By the end of 2015, the American Food and Drug Administration (FDA) had approved the sale of over 85 3D-printed medical devices, such as prosthetics, surgical tools, and artificial replacements for damaged bones. Spritam, a pill for treating epilepsy, became the first 3D printed drug to gain FDA approval in 2015. These uses of 3D printers are innovative, but they mainly offer another way to manufacture existing medical technologies. The emerging field of bioprinting, which uses 3D printers to assemble products out of living material, is more likely to revolutionize the power of medical intervention.

Similar to how conventional printers can reproduce digital photos and documents, 3D printers can build whatever a computer-aided design (CAD) file can describe. According to the instructions from a CAD file, 3D printers move upwards as they deposit material – often plastic, metal, or, in the case of bioprinting, living cells – onto successive two-dimensional layers. These machines commonly employ a technique called ink-jet printing. In basically the same way as piping tubes push icing onto gingerbread houses without touching the surface, ink-jets drop microscopic amounts of material onto the top of a 3D printed object.

In order for living cells to survive this process, engineers needed to address the high pressures and temperatures inside the ink-jet. Thomas Boland, William Crisp Wilson, and Tao Xu earned a 2006 patent for their success in extending the versatility of 3D printers to living structures. Their modifications to ink-jet printing enabled between 25 per cent and 85 per cent of printed cells to remain alive 24 hours after incubation. Bioprinted cells can now survive for weeks, and engineers are continuously working to further extend this lifespan.

This technology has potentially life-saving applications. According to the government of Canada, over 4,500 Canadians in 2014 were waiting to be matched with organ donors. In the same year, 278 Canadians who needed organ transplants died on the waiting list. If bioprinters evolve to the point where they can manufacture implantable organs, the healthcare system could eliminate the current disparity between the number of organ donors and the number of people whose survival depends on organ donation. Research at the biotechnology company Organovo is contributing to prevent the organ shortage from claiming more lives. Considering that a third of the aforementioned 278 deceased Canadians were awaiting kidney transplants, Organovo’s ability to bioprint functional human kidney tissue gives hope for the future of organ replacement.

Beyond guaranteeing a renewable source of viable organs, the most advanced uses of bioprinting would remedy additional challenges related to organ transplantation. Accepting an organ from a human donor requires patients to indefinitely suppress their immune systems’ urge to reject the foreign tissue. Consequently, recipients of organ donations must weaken their natural protection from disease for the rest of their lives. Prior to starting the bioprinting process, a patient’s doctor would extract a sample of healthy cells to multiply in the lab. The bioprinter would then construct the replacement tissue from cells with only the patient’s genes, thereby allowing the immune system to recognize the new tissue as safe. Unlike waiting to receive organs from a person with compatible DNA, doctors who use bioprinting could tell their patients exactly when a new organ will be ready for surgery. In these two ways, bioprinting would remove the uncertainty of when healthy organs will become available and whether the patient’s body will accept the donor’s tissue.

In addition to automatizing organ donation, bioprinting may eventually offer alternative treatments when person-to-person transplants are impractical. At the Wake Forest Institute for Regenerative Medicine, a campus for training medical students, researchers are developing bioprinted skin with the goal of treating burn victims. Severe burns conventionally require using some of the victim’s healthy skin to cover the damaged areas. As explained by the Burn Injury Recovery Centre, using skin from another person is only adequate for one-to-three weeks before the immune system’s aggressive reaction forces doctors to remove the donated skin. The only permanent treatment thus requires doctors to inflict a second wound as large as the first, whereas the Wake Forest Institute reports that its bioprinters can make enough replacement skin to cover a burn with ten times less healthy tissue that is usually needed.

Not yet widely available

Unfortunately, the people who would benefit from these advantages of organ printing must wait for the technology to become a viable and widely available option. Reproducing the complex structure of human organs is one of the most ambitious goals in bioprinting, especially when one’s purpose is to implant bioprinted tissue into the human body. While bioprinters evolve, their products are still finding immediate applications in medical science. Organovo’s kidney and liver tissues are commercially available to pharmaceutical companies, enabling researchers to test their medications on bioprinted tissue. The results of these tests can help the researchers to determine which drugs are most likely to succeed in clinical trials, thereby speeding up the process of releasing new medications.

Outside of medicine, this opportunity to avoid the strict regulations over testing products on humans is attracting other corporate interests. In 2015, a press release from Organovo announced its collaboration with L’Oréal in pursuing their goal of bioprinting human skin. The cosmetic company intends to test its products on the bioprinted tissue.

Before companies like Organovo can gain approval for this type of application, governments will need to set clear, regulatory standards for the quality and accessibility of bioprinted products. The rapid advancement of bioprinting technology forces legislators to consider how society should use and control the power to mass produce the fibres of the human body.