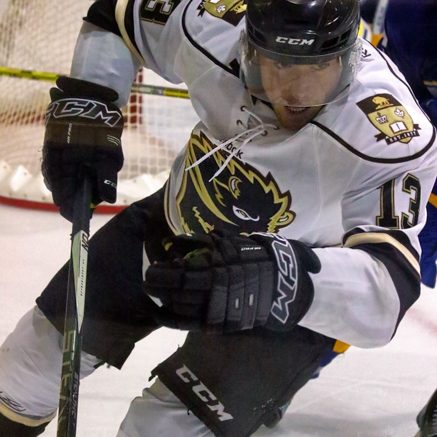 After earning their first home sweep of the 2016-17 season, the Bison men’s hockey team traveled to Vancouver to play a two-game series against the UBC Thunderbirds. The Bisons lost a close one on Friday 4-3, but won on Saturday 4-2.

The Thunderbirds were nipping at the Bisons’ heels for the sixth and final playoff spot heading into the weekend. This was a critical weekend for both teams, as they are currently separated by only three points in the Canada West.

Friday was the Winter Classic for UBC, and 5,036 fans came out to watch the Bisons and the T-Birds battle. The Bisons wanted to spoil the party, and they started out great with Nick Zajac scoring halfway through the first. Jordan DePape added one on a power play early into the second but it was downhill after that for the Bisons.

In a span of four minutes, the Thunderbirds struck three times – twice on the power play – to make it 3-2 for the home side. The ’Birds added another power play goal with three minutes to go in the second to make it 4-2 after 40 minutes of play.

Shaq Merasty scored with two minutes remaining in the third period, but it was not enough. The second period collapse was good enough to send home the 5,036 fans in attendance happy. Brett Stovin had two assists on the day, tying him for the team lead of 12 with Remi Laurencelle.

The Bisons were looking for redemption on Saturday after a poor showing on Friday night. Manitoba came out strong in the first period, leading to a 4-2 victory. The Bisons left no time to waste on Saturday, with Stovin scoring 74 seconds into the game. Quinton Lisoway scored 96 seconds later to make it 2-0 for the away team.

Justin Augert scored his ninth goal of the year to make it 3-0 for the Bisons after one period of play. The ’Birds cut into the Bison lead halfway through the second via Austin Vetterl.

Merasty scored his second of the weekend to restore the three-goal lead in the third period. Merasty has now scored in his last three games, earning five points in that stretch. He’s also tied with DePape for the team lead with 17 points.

With the split this weekend, the Bisons move into fifth in the Canada West with a 9-10-1 record. This weekend’s series against the Pronghorns will be pivotal as they are both tied with 19 points, but Manitoba has more wins, so they hold the tiebreaker. It will be a good chance for the herd to get some breathing room and push for finishing high enough in the standings to be able to host a playoff series.

Lord of the crease: the two towers