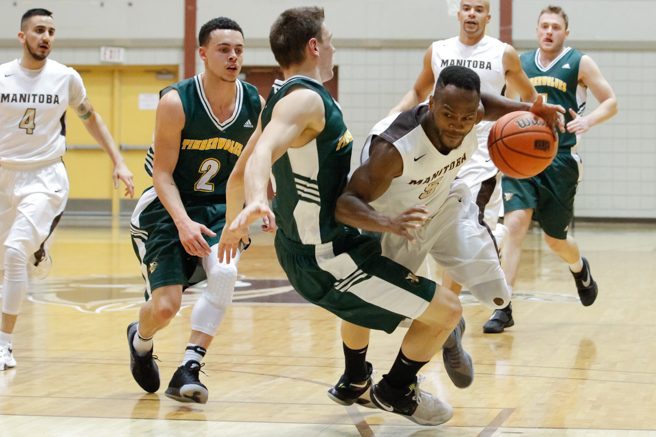 In a home series against the University of Northern British Columbia, the Bison men’s basketball team were riding a six-game winning streak. Manitoba made it eight after winning 86-85 on Friday and 77-68 on Saturday.

On Friday, the Bisons escaped with an 86-85 win over the UNBC Timberwolves. Both teams opened the game shooting well, exchanging looks throughout the opening frame. Neither team was able to go on a run, but the Bisons were able to exit the first quarter with a two-point lead. It was in the second quarter where the home side pulled away a bit; Manitoba went on a 13-0 run within the frame to build a 12-point lead.

AJ Basi powered the team’s second quarter with 12 of his team-high 23 points. The Timberwolves got back into the game, and cut the lead to nine entering the half. The visitors connected on eight of eleven three-point shots, with Marcus MacKay hitting four of them, to keep the team in the game.

Mackay hit his first three three-point shots to open the third, and finished the game with a game-high 28 points, helping UNBC remain in striking distance. UNBC went on an 11-2 run in the third quarter, cutting the lead to just one point, and eventually took a 72-70 lead into the final quarter.

Manitoba trailed for the majority of the fourth, but down 85-82, Basi and Ilarion Bonhomme both went 2-for-2 from the free throw line to take an 86-85 lead with under 30 seconds to play. UNBC missed the final shot of the game, as the Bisons squeaked out with their seventh straight victory.

The Timberwolves made 13 three-pointers in the game, which was a major factor to keeping the game close.

“We knew they were a three-point shooting team, that’s what they do,” Bison head coach Kirby Schepp said. “They shot it really, really well, because they got great open shots, so we need to look at that and hopefully make some corrections.”

On Saturday, the Bisons extended their conference win streak to eight games, by defeating the UNBC Timberwolves 77-68 in the second game of their weekend set. With the win Manitoba improved to 10-6, while UNBC dropped to 4-12 in conference play.

Defence was strong for both teams during the first half, with the Bisons allowing just two UNBC three-pointers to fall, a day removed from giving up 13 total. Manitoba also forced a lot of turnovers in the opening half, and were able to capitalize by scoring 12 points off of them.

Both teams shot under 50 per cent for the first half, resulting in a low-scoring 34-26 lead for the Bisons 20 minutes in. Justus Alleyn scored seven of his 19 points in the first half to lead the Bisons, while Rhys Elliot netted eight of his 19 for UNBC.

The offence came alive in the second half, with both teams shooting above 50 per cent in the third quarter. Basi led the Bisons in the third with two three-pointers. With the teams exchanging shots, no real dent was made in the Manitoban lead until the visitors ended the frame on a 9-0 run, cutting the lead to just four points entering the fourth.

UNBC didn’t stop battling, but each time they scored to bring the game closer, the Bisons seemed to make a much-needed basket. Keith Omoerah and Jonathon Alexander made clutch shots late to ensure the herd’s victory.

“Certainly the first half, I think we really defended well,” Schepp said postgame. “We need to play better offensively, I thought we weren’t really cohesive as a unit. That’s probably the next piece for us we need to get better and better at.”

Manitoba will be back in action Feb. 3-4, when they travel to Brandon to take on the Bobcats.