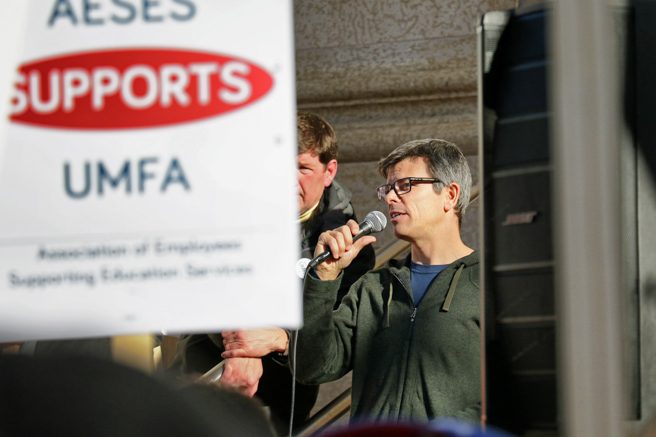 Over a month has passed since members of the University of Manitoba Faculty Association (UMFA) closed our picket lines and returned to work in labs, offices, and classrooms. The post-mortems of the strike will, with the benefit of hindsight, variously pronounce world-historical failure or qualified success. Rather than pick at the remains of the strike as though it were now rotting away, today I am sending a message of appreciation to the U of M community – particularly the student activists, but also UMFA members and the members of Unifor 3007, CUPE 3909, and AESES – for what you all helped accomplish during those three weeks in November, and now, I am issuing a call-to-arms for a struggle in which the strike was simply one moment.

The strike was not an easy time for anyone, and I recognize that it has complicated lives and plans. Sometimes, though, you have to take a determined stand for what you believe in. We believe that the U of M can and should live up to the promise of “inspiring minds.” But the realization of that promise has to be fought for by those who make up the core of the institution – faculty and students. Its realization runs against the currents of change pushing on post-secondary education in Canada and internationally.

The issues we were striking over were, and are, pragmatic and directly relevant to the university as you experience it. For example, the limits we were able to put in place on workload increases are an example of the kind of collegial governance we would like to see more of at the U of M. Used appropriately by faculty, they offer the opportunity for more time to stay on top of our fields, more time to prepare for classes, and more time to engage with students outside of class.

We also won important limits on the use and misuse of performance metrics, and forced a full inquiry into their effects on teaching, learning, scholarship, science, and creative work. The things we achieved together hold the potential to change business-as-usual at the university and to hold at bay significant threats to our ability to teach and research fully and freely.

Unfortunately, even with a strong strike, we were unable to move the administration to extend protections against layoffs for financial reasons to librarians and instructors. UMFA did win a spoken-word guarantee of no layoffs for either of these groups until 2019, but this is nowhere near the same as winning fair and equal job protections.

The academic freedom that professors of all ranks enjoy derives from the fact that the administration can’t just lay professors off without a genuine and demonstrable financial exigency. If a professor is making unorthodox statements, or is challenging the way that the university is being run, they can’t be singled out and given the axe on the pretext of a budget crunch. Instructors and librarians, in order to do their jobs well, also need this freedom, and we must continue to push for it.

One other area we didn’t get movement on in this agreement was closing the wage gap between staff at the U of M and other comparable universities. This is bad news for hiring, retaining, and keeping and developing original, passionate, and responsive teachers and researchers.

It needs to be addressed, and we will continue to work towards narrowing that divide.

But the strike has had a wider impact than those reflected in our new collective agreement. It opened up a space for a conversation – maybe even an argument – about what kind of university we want and how we can build it. The strike has forced us to grapple with questions about the role of the university, how it should be governed, and what kinds of priorities should drive it. It gestured to the broader context of post-secondary education: a context that no single strike or action can adequately address, but one that clearly needs to be questioned.

The UMFA strike served as a platform for students to engage in these conversations and arguments. It was incredibly heartening to see how students rose to this, became informed, talked to their classmates and to faculty on the picket lines about the issues, debated in their student associations and councils, and became central actors in the dynamic of the strike.

The challenge we now face is keeping conversation and organizing alive now that we are “back to normal.” “Normal” as it has been defined over the past couple of decades is what created the conditions for the strike. The “normal” pressures on universities to become more narrowly “efficient,” to squeeze more teaching from an overworked faculty, to dehumanize education, to be responsive to the will and wishes of private funders, to evaluate the success of our endeavours and justify our existence on the basis of reductionist measures, are no less present post-strike. And new threats to the public mission of the academy are on the horizon.

We continue to hear rumblings of tuition increases, paired with a provincial budget context guided by the blinkered mindset of austerity. Things are likely to get bumpy for faculty and students concerned about the creation of a university with the principles of affordability, access, free inquiry, and engaged learning at its heart. We will need all of our collective will and capacity to confront that rough road, and to build the university whose possibility we glimpsed during the strike.