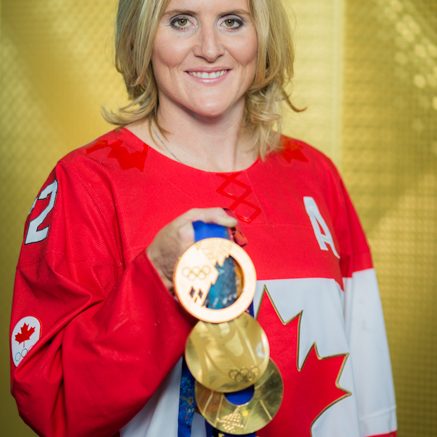 A photoshoot with Sochi Olympic gold medalist Hayley Wickenheiser at the Winsport, Markin MacPhail Centre in Calgary, Alberta on May 27, 2014.

Hayley Wickenheiser was one of the greatest Canadians to ever play the game of hockey. The Saskatchewan native broke into the game at the age of 15, making an immediate impact and while still a teen was beginning to be called the greatest women’s player in the world. 23 years later, number 22 has a trophy cabinet that would make even Wayne Gretzky jealous.

Five Olympic medals – starting back when the women’s tournament was first introduced in 1998 – comprised of four gold and one sliver. To go along with those medals and the 16 goals scored in Olympic play, she has seven world championship titles and was the first woman to score a goal in men’s professional hockey.

The 38-year-old took to Twitter on Jan. 13 to announce she was hanging up her skates to pursue a life after the game. She indicated that she plans to pursue medical school and to spend more time with her young son, Noah. She leaves the game behind, a game she has had an indelible impact on, growing the women’s game and blazing a trail that few will be able to equal.

Carving her path in the hockey world was never easy for Wickenheiser. Before playing for Finnish club HC Salamat, she was denied eligibility to play professionally in Italy by the Italian Winter Sports Federation. She also turned down an offer from NHL legend Phil Esposito to play for the Cincinnati Cyclones of the East Coast Hockey League, settling on Salamat after the Finnish Hockey Federation unanimously supported her selection.

After impressing the likes of Bobby Clarke during the 1998 Olympics and earning offers to take part in training camps for men’s teams, Wickenheiser jetted off to Finland. There she played division two men’s hockey, recording 2 goals and 10 assists in 23 games.

However, this was not the only pro hockey she would play, as she returned home to join the Calgary Inferno of the Canadian Women’s Hockey League (CWHL). In her only CWHL season, Wickenheiser tallied three goals and 13 assists while helping the Inferno win the 2016 Clarkson Cup.

After Wickenheiser, no woman would get close to playing regular season hockey for a North American men’s club until American defender Angela Ruggiero suited up for the Tulsa Oilers of the Central Hockey League. Wickenheiser’s national teammate Shannon Szabados is the latest woman to join the North American men’s ranks, suiting up for a full season between the pipes for the Columbus Cottonmouths of the Southern Professional Hockey League.

Following professional success and characteristically excellent international play, Wickenheiser began to desire a change. In 2010, she joined the University of Calgary Dinos of the CIS (now U Sports). This was preferable to the women’s hockey star because of their daily practices and the ability to stay close to her young family. Despite playing in only 15 of the Dinos’ 24 regular season games, Wickenheiser amassed 40 points – 17 goals and 23 assists – earning herself the Brodrick Trophy as CIS MVP.

While studying for her kinesiology degree, Wickenheiser recorded 55 goals and 79 assists, for a total of 134 points in 68 CIS games.

Wickenheiser leaves the game first in lifetime Olympic scoring, first in women’s World Cup scoring, fourth in all time CIS scoring, and the first female player to play in two men’s leagues. That goes along with her spot on the Canada Walk of Fame and being awarded the Order of Canada.

Gretzky spoke highly of Wickenheiser during a tribute at Rogers Place on Jan. 15 before the Flames and Oilers played.

“You are the Gordie Howe of women’s hockey,” Gretzky said. The ultimate compliment for any hockey player, even greater still is that it came from Gretzky himself. To be compared to arguably hockey’s greatest player, by the man literally called “the Great One.”

There is no question that Wickenheiser will be inducted into the Hockey Hall of Fame, joining Cammi Granato, Angela James, and Geraldine Heaney. Sports writers such as Jeff Blair have argued that “the Gordie Howe of women’s hockey” deserves a little something more.

In an article written for Sportsnet, Blair suggested that Hockey Canada retire Wickenheiser’s number 22 across all national teams, men or women.

“I cannot think of another hockey player who has had as much of an impact on his or her sport at the grassroots level in this country,” Blair wrote. “With all due respect to Wayne Gretzky, Canadian boys would have played hockey with or without him.”

Blair goes on to pose the idea of having Wickenheiser’s number honoured, by having a banner with her name and number hanging in every Canadian NHL arena.

Whatever our nation’s hockey governing body does or does not do is of no importance. Wickenheiser will always be heralded as a trailblazer, inspiration and one of the greats, across both genders.