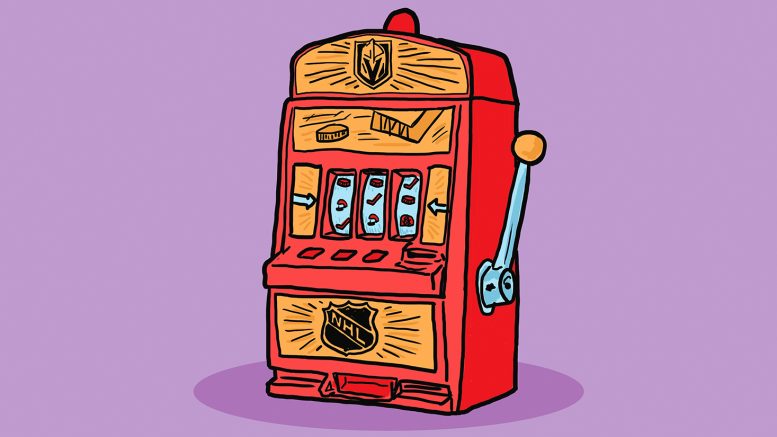 On Nov. 22, 2016, it was made official by majority owner Bill Foley that the new Las Vegas NHL franchise would be called the Vegas Golden Knights. Months after it was announced that expansion was in the works and that Las Vegas had been awarded an expansion franchise, it seemed fitting that, responding to a crowd of boos, NHL commissioner Gary Bettman replied, “Keep booing, it proves you’re now an NHL city.”

Of course, it will take more than booing the commissioner to really know if Las Vegas will be able to sustain a professional hockey team. In the end, pro sports teams are really just businesses with a product looking to maximize profit. A popular tourist spot, Las Vegas at first glance seems like a great location for pro sports to expand in. Mark Davis, owner of the NFL’s Oakland Raiders, has expressed determination to move the team there.

It can’t be denied that some of the ticket sales made by the Knights will come from tourists passing by looking for something to do or the fans of opponent teams looking to see their team play, among other things. But the team has already sold 14,000 season tickets in a 17,500 capacity arena, so it seems enthusiasm for the team is high. Compared to former expansion teams, optimism for success may be high as well.

That’s not to say that there was less optimism for success for all former expansion teams. Some have gone to establish themselves as a franchise and have their city’s embrace. Others however, didn’t fare as well. The Manitoban takes a look at those teams to explain what happened, and what Vegas could learn from their stories.

Three name changes, along with three different owners for the team’s first four years of existence. That fact seemed to spell doom for the Seals from the start. They never finished above a .500 average in record standing, but were able to make the playoffs twice. They were ousted in the first round for both of those appearances. The World Hockey Association (WHA) was also created during the Seals’ time, which only amounted to more woes as several of their players left to join teams in the WHA for better salaries.

Eventually, the Golden Seals moved to Cleveland in 1976, but that team folded and merged with the Minnesota North Stars in 1978. This was during a time that hockey might not have been as popular in the U.S., as the Seals had an average attendance of 5,607 over their nine seasons in California.

A slow start for the team in Atlanta was compensated by consistently decent hockey for the rest of its time there, emphasis on decent. In the team’s eight-year history, they made the playoffs six times, but had merely two wins to show for it. There were a couple bright spots for the Flames, such as Eric Vail and Willi Plett winning the Calder trophy in 1974-75 and 1976-77 respectively. Jim Craig, the goalie who backstopped the U.S. Olympic Hockey Team to a gold medal and was part of the “Miracle on Ice” during the 1980 Winter Olympics, made his debut shortly after that historic run to Atlanta’s first sellout crowd of 15,156. The magic fell flat soon after, though, as Craig only played four games for the season.

Attendance started to dip, which resulted in more financial losses for owner Tom Cousins. Low viewership meant no TV deal for the team to try and save it, and soon enough the Flames were sold to Calgary in 1980. The team still exists today, of course, and the “A” patch they use on their jerseys for assistant captains resembles the old logo of the Atlanta Flames.

They were there and then they were gone. That’s about all you would need to write on the Scouts’ history, as they lasted only two seasons before being sold. In the 160 games they played from their two 80-game seasons, they managed 27 wins and 23 ties, to go along with their 110 losses.

A season ticket drive that had only 2,000 sales out of their goal for 8,000 indicated that pro hockey just wasn’t going to work in Kansas City. The team moved to Colorado, and then that team moved to New Jersey, which still exists today as the Devils.

The NHL and WHA went through a merger in 1979, and the Whalers were one of four teams to move on over. At first glance, seeing that they lasted for 18 years in the league might lead one to believe that they were relatively stable. Indeed, it seems they would have been able to stay in Hartford, had it not been for poor management.

Another thing is that they were at the epicenter of three NHL teams surrounding them geographically. On one side, there were the neighbouring state rivals and more popular Boston Bruins. On the other were the established New York teams, the Rangers and the Islanders. With a situation like that, it would be hard to try and market yourself to fans next to those three powerhouses.

The Whalers had big names in their inaugural season – Gordie Howe and Bobby Hull, to name a couple. But they soon retired after getting swept in the first round of the playoffs. Ron Francis was the face of the franchise and loved by the Whalers’ fans, but after being sent to the Pittsburgh Penguins in a lopsided trade in 1991, that left a bad taste in the mouths of the Hartford faithful. The performance of the team during the 18-year tenure earned them the nickname “Forever .500s.” Though they were able to make the playoffs eight times, they made it past the first round once and had opening round exits in the other seven appearances.

With rumours of movement, fans banded together to get involved in the season ticket drive for 1996-97 campaign. It turned out much better than what the Scouts had tried, but crumbling talks in the form of a deal for a new arena resulted in owner Peter Karmanos Jr. moving the team to Carolina. Today, they are the Hurricanes.

What Vegas can Learn from history

Regardless, it seems like almost every expansion team that had to make a move went through such similar stories that it can be reduced to a formula: poor performance = poor attendance = poor profits = poor morale = potential for moving.

I say almost every team because Hartford, Quebec, and Winnipeg had rabid and loyal fan bases that would have done almost anything to keep their team close. But money is the motive, and in the end, that was the one problem that fans couldn’t collectively solve. Winnipeg, luckily, has brought a team back.

Now, the impromptu formula listed is probably obvious to a lot of people. But it’s worth looking back at history to see what Vegas can do to make sure what happens there stays there. How the team performs at the start will be key, but it’s clear from projected rosters that they won’t be a playoff or even a wild card contender from the start. They’ll need to draft high and start building from the ground up.

Attendance, as mentioned, seems to be in good hands: 14,000 season tickets sold, with fans vacationing in Vegas to be filling the rest of the seats. T-Mobile Arena, where the Golden Knights will be playing, is owned 50-50 by MGM Resorts International and Anschutz Entertainment Group. So it looks like Foley won’t be having to dig into his pockets should arena troubles come by.

Vegas will just need to weather the storm, and hope they can maybe come by a miracle for their assumed impending lackluster start once the franchise begins play for the 2017-18 season. Hopefully their fans will stay and they can get new ones on board, or else run the risk of being another former expansion team in the history books. However, given Bettman’s previously adamant stance on keeping the Coyotes where they were despite factors that would’ve led the team to move, maybe Vegas will be alright.

“Believe me, we won’t screw up the first game like we screwed up the video,” Foley said, after a botched introduction to the team’s name. The sports world will be watching to see if he can hold true to that statement.