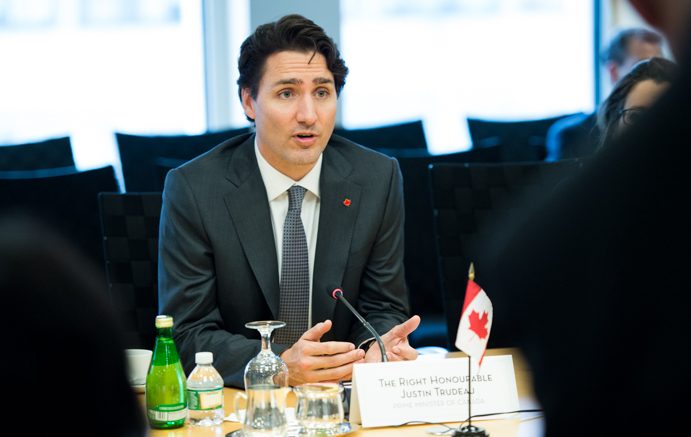 Prime Minister Justin Trudeau has broken the hearts of progressives across the country by approving Kinder Morgan’s Trans Mountain and Enbridge’s Line 3 pipelines. Over the course of the last few months, there has been increasing speculation that the Liberal government would green-light these projects – so while the result is not altogether unexpected, it is no less disappointing.

Ten years ago, I became a member of the Liberal Party of Canada at the earliest available opportunity. I still remember how thrilled I was for my fourteenth birthday, the time at which I could receive my membership card in the mail. My motivation to join the Liberals was due in large part to the Conservative government’s environmental policy. Even at that young age, I was incredulous that Stephen Harper refused to take any serious measures to fight climate change. I wanted to do everything I could to try and stop him.

With Trudeau’s decision, I feel the same anger that I had regularly experienced with our last federal government. It is the familiar sting of having elected representatives that blatantly disregard our environment and the future generations that will be forced to deal with the ramifications of climate change. While the Liberal government has ratified the Paris Agreement, promised to implement a carbon tax, and invested in sustainable infrastructure, these pipeline approval announcements serve as a slap in the face to everyone who supported the party in the hopes that our country would become an environmental leader at home and around the world.

In 2008, the non-governmental organization Environmental Defence published a report that called the tar sands of Alberta one of the most damaging environmental industries in the world. While Canada is not a large emitter of fossil fuels in absolute numbers in comparison to much larger countries, it is still our moral imperative to take responsibility for our enormous per capita emissions and the fuel we supply to other countries.

I was impressed when our federal government announced a national carbon tax – this was a bold policy proposal designed to transition us off of a carbon economy. Now, the pipeline announcement threatens the entire environmental agenda of the Trudeau government. Good luck selling the message to Canadian families that they need to be taxed on carbon consumption when oil and gas companies are allowed to increase their capacity and distribution. This is an incongruous message which tells us that there are a different set of rules for the oil giants.

The public is now being told that we will grow our economy through expanding the oil and gas sector while simultaneously transitioning off of fossil fuels. This sounds awfully similar to ‘we want to have our cake and eat it too.’ I am sorry, building pipelines and responsible environmental stewardship are mutually exclusive. If you are not actively fighting both the consumption and production of fossil fuels, you are part of the problem.

If environmental responsibility is not enough of a reason to oppose this decision, I would like to tackle the notion that these pipelines are beneficial for our economy head on. While it is true that the short-term profits generated by large oil and gas companies will pay shareholders, employees, and the government through the sale of Canada’s natural resources, this practice is a shell game. It is only profitable because of what we choose to actually measure on our financial statements. There are real, tangible financial costs to harvesting our resources and pumping fossil fuels into the atmosphere – just because it isn’t recorded on the balance sheet, doesn’t mean that it doesn’t exist.

In this world, not all money is equal and we should not pretend that it is. A dollar earned in the oil patch comes at a more significant cost than we are led to believe. It is a cost to the environment but ultimately to our economy as well.

It is true that our country’s economy currently runs on natural resources – this has been the case since the English and French first arrived on the continent – but it doesn’t necessarily have to be this way. We have a disproportionately large resource economy because it is easy, not because it is smart. We harvest resources, sell them to other countries as raw material, and then buy back the final processed goods from them because they were made with cheap labour. Globalization has allowed us to remain wealthy not through what we have created, but by selling what was here long before us.

Since the industrial revolution and the development of modern-day North America, western economies have been built in large part due to fossil fuels. Now, while facing an existential threat in the form of climate change, the world must adapt or we will pay an ecological and economic price. This argument might seem naïve considering our current reliance on the oil and gas industry, but the pitfalls of ignoring the science and economics of our situation will cost more in the long run.

As an economy changes, there are those who are inevitably left out and one need not look farther than the rust belt of the United States. Donald Trump has curried favour with despondent and unemployed coal workers who have had their livelihoods stripped away by a changing world economy. There is no question that many Canadians are suffering similar fates and I empathize with their position. This is a systemic issue that no individual can change on their own.

Meanwhile, the government says that this will create 23,000 new jobs in western Canada. I would like to see metrics that assess what the long-term impacts of climate change will be on the entire Canadian economy within the next 50 years. The impending effects of climate change in the form of extreme weather, flooding, wildfires, and rising sea levels will come at a heavy price. Jobs on the oil patch will start to look awfully expensive when compared to the very real costs of climate change.

This week, the prime minister helped create thousands of new jobs, billions of dollars in new revenue for our country, and strengthened international trade relationships. But at what cost? In the process he has also undermined Canada’s commitment to the environment, proliferated fossil fuel emissions on a global scale, and pushed the burden of these decisions on to a future generation.