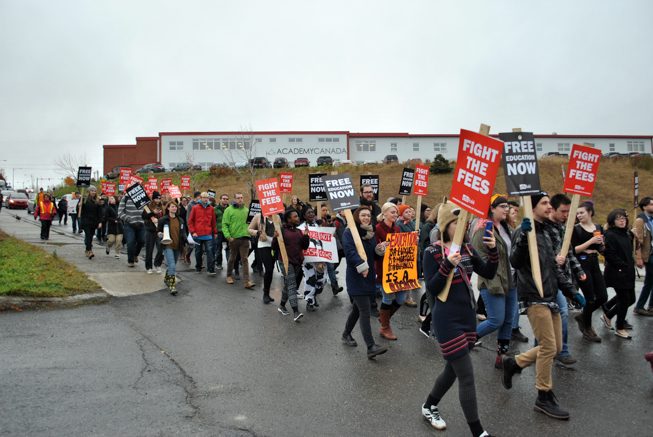 Far past the closing of the 35th annual general meeting of the Canadian Federation of Students (CFS), tweets rang out early into the night with various 140-character accounts of what went down. We have seen these claims repeated since the meeting ended, where delegates who were at the meeting have claimed that the CFS does not support the voices of international students.

These claims reference the fact that delegates attending the AGM voted to table a motion brought forward by local 103, the University of Manitoba Students’ Union (UMSU), that proposed a policy tying international students’ tuition increases – our tuition increases – to those of domestic students.

We are unapologetic in our demand for fairness. While we can discuss reforms to the structure of the organization, the CFS cannot compromise on our foundational principle of opposing tuition fee increases.

At CFS general meetings, motions get debated vigorously – arguably more than any comparable organization in size or scope (650,000 members, 80 locals, 9 provinces). Not only do all of the motions make it to the plenary floor, but also over the course of the AGM, member locals discuss, debate, and amend the motions in multiple contexts.

The motion from UMSU ended up being one of the most contentious motions at the meeting, but it did not have to be. In our constituency discussions, international students from across Canada unanimously opposed having our national body support tuition increases. International students today pay on average 3.7 times more than domestic students for post-secondary education because of the nationally-condoned, xenophobic practice of charging international students differential fees.

The policies of the CFS matter because they define what we fight for in the streets and what we lobby for from government. The future that we strive for is one without any differential fees, and better yet, no fees at all. The CFS’s current policies already oppose all differential fees for international students and supports the establishment of institutions to enshrine that.

Confident in our position, we reached final debate on the motion, asking delegates to support us. What we did not expect was to see some domestic students, including delegates from the University of Manitoba, line-up at the microphones to condemn the unanimous voice of international students. Instead of listening to our voices, those of us who are the object of the motion, they echoed what we have heard from government and administration for many years – that we should accept tuition fee increases. If the intent of UMSU’s motion was to show solidarity towards international students, then it failed dramatically.

We ask for support from domestic students in Canada because the system here disrespects us at every turn. We are not allowed to vote for a government that will support us, and often cannot access healthcare, good jobs, or predictability around immigration. International students need the support of a national student movement, which is not what we were provided by the few but vocal supporters of UMSU’s motion. We need a strong student movement to fight against tuition fees and xenophobia now more than ever.

Mary Asekome and Sofia Descalzi are co-chairs of the international students’ constituency group at the Canadian Federation of Students.

Strangling democracy by the threshold