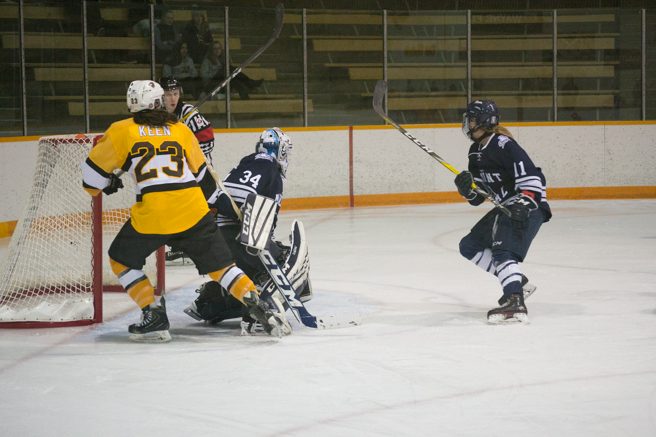 The 2016-17 season for the University of Manitoba women’s hockey team has been one of promise. The Bisons started the season on a tear, dominating games until hitting a brick wall against the University of British Columbia Thunderbirds. Despite that early setback they regrouped and kept trucking, heading into the break 8-4-3-1.

“I think the trip to Europe really helped us,” Manitou native Lauryn Keen said of the hot start. “I think it helped us bond as a team and really got the rookies in there.”

Keen is in the midst of a whirlwind season of her own, as she is currently sitting in third place in Canada West scoring with 17 points in 16 games. But Keen tries not to let that become a focus for her.

Through the first 16 games of the season, Keen has recorded 17 points, putting home a team-leading six goals while adding 11 helpers. She’s already eclipsed her 11 points from last season and all odds point to her surpassing the 18 points she put up in her rookie campaign.

When asked if a difference in preparation could be linked to this spike in scoring Keen said no, mentioning that old-fashioned hard work is the key to her success. She’s prepared the same way her whole career and it’s worked out so she hasn’t changed.

“I’ve just been working hard in the gym and worked hard in the summer and it’s just paying off,” Keen said. “I’m doing it for the team and trying to win for the team. I’m not trying to go out there and get as many points as I can.”

Keen doesn’t find the workload of being a top-flight hockey player to be an issue. The agriculture student is taking six courses, noting that all it takes is a little advanced planning to make sure everything works out.

“It’s definitely a balancing act,” she said with a chuckle. “It’s something you have to learn over time, the biggest thing is just staying on top of things, planning two, three weeks ahead.”

Being a third year player means that Keen has to begin confronting the end of her collegiate hockey career, but she doesn’t let that get her down. She’s looking forward to life after hockey, taking time off before eventually using her agriculture degree and country background to settle into the workforce.

“I think about it, but I don’t try to think about it much,” she said, adding that a trip to Australia would be something to consider.

Keen does see hockey playing a role in her life moving forward. She has aspirations to continue coaching young players back in Manitou, and also has been mulling over coaching her old AAA club out in Morden.

“Maybe be an assistant coach out there, if that’s something I want to do,” Keen said laughing. “I’m not sure I’ll be able to give it up completely, it’s a lifestyle thing.”

“If the offer was there I would definitely consider it, but there’s a lot to consider,” she said with a laugh.

For now though, Keen and the Bisons head into the winter break in a comfortable position, sitting second in the Canada West.