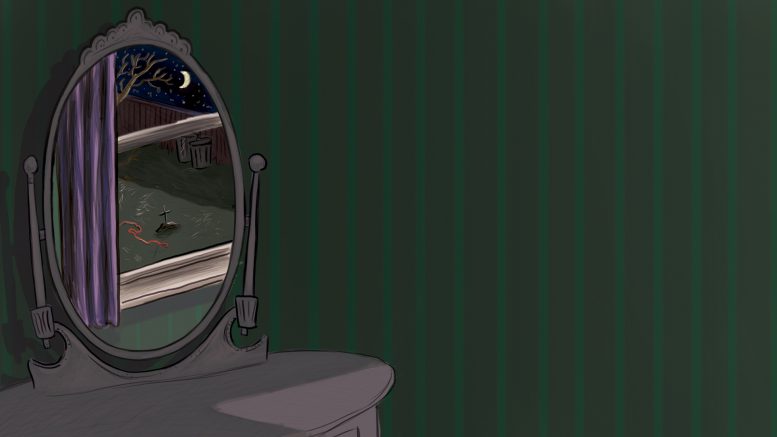 She hasn’t been sleeping lately. She floats for eight hours a night in a dreamless blur. She wakes up for good around 5:30 am and she stares at the ceiling in the low light. The sun rises, and a golden sliver jimmies its way up through the window, and then slowly widens, slowly slowly. The light touches the end of her bed and then her toes and then her knees and she can feel the warmth moving slowly up her body until she is lying under a blanket of sun.

In the kitchen, Father sits at the Formica-topped kitchen island, reflected in its blue-grey speckled sheen. Around him is a wall of books, which he constructs every morning, fat old books, bulging with knowledge: a concordance, three commentaries, and the Bible in several translations. Fiona sits down across the island and he peers over the stack of books and slides a box of cereal across the counter towards her.

She fills her bowl with cereal and with milk, which is skim milk, which she hates, but which is the only thing Mom buys. Mom runs through the kitchen and tosses a box of granola on the table, saying, there’s this too, even though everyone is already eating.

While they crunch cereal between their molars, Mom slurps coffee, standing up, at the kitchen sink–too noisily. Each slurp makes a muscle appear and shiver in Father’s jaw.

A new noise is added to the mix. Father looks around, perplexed, and then finds the source. The cat is visible through the doorway into the living room, where he is sitting on the ground with his front paws in the air, calmly dragging his claws in neat rows down the length of the caramel coloured sofa. Father begins to bellow, no no what is it doing, and Mom begins flitting around like a bird, chirping and waving her hands. Father tries to pick up the cat and throw it outside. Fiona says he can’t do that and when he screams, why not, Mom squeaks that cats have to be kept inside now, it’s the law.

Fiona leaves the scene, retreating to her room to slowly put on her school clothes. Father is banging heavy books downstairs. The cat comes up to join her, pooling its slinky body in the sunlit folds of her blanket.

Mom picks up Fiona after school and takes her along to pick up dinner at the Chinese take out place. While she pays, Fiona taps out a rhythm with a pair of wooden chopsticks and sings the words from a nearby placemat in her head. Year of the tiger, year of the dog. Year of the dragon …

Back at home, their chopsticks tap on the surfaces of the Everyday Plates (not as nice as the Company Plates). Mom scrapes sweet and sour chicken from the bottom of a styrofoam container. Father looks at her and she raises her eyebrows high so that her forehead becomes an accordion of wrinkles. Oh did you want more of this? she asks.

How was school? asks Father and Fiona tells him the truth: I don’t remember.

The cat is throwing up a hairball in the corner. Father throws his napkin down and begins yelling again. He grabs the cat around its little waist and heads towards the glass doors in the back of the dining room, to throw it outside. Mom runs after him. Fiona eats the last of the fried rice.

When Mom comes back she says Father put the cat on a leash so it can’t wander around the house and get away. Father isn’t coming back to the table. Father has a headache. He had a long day. The cat was bothering him all day. Mom cleans up the hairball. She says, the sermon is giving him some trouble this week. Fiona asks if it’s something to do with cats and Mom’s face goes funny and then she says no, what she meant was, he’s finding it hard to write.

In the dark it’s hard to sleep because sounds seem louder. Mom almost forgets about the cat, but the leash can reach almost right up to the sliding patio door, so the cat sits by the glass and mews until he’s brought back inside. When Fiona has brushed her teeth and said her prayers, she lies in bed, blinking slowly, until the cat joins her. His padded feet announce his presence before the warm wiry body slides in beside her. He curls onto her stomach and vibrates softly until she blinks and the cat is gone and the sun is pushing its sliver of light over the edge of the neighbour’s rooftop.

In the kitchen, Father has constructed his wall of books again. He drains three cups of coffee while Fiona eats her rice crisps. His eyes are surrounded by creases, making his skin look like crumpled paper. He stares at Fiona while she chews her cereal and he says, you eat like your mother.

Father puts the cat out on the leash before Fiona leaves for school. He says he needs the cat out of the house so that he can concentrate. Fiona goes to school and Mom goes to work and Father goes inside to Struggle with his sermon.

A squirrel taunts the cat from the top of the backyard fence.

When the squirrel dashes down the outside of the fence and the cat slips off after it, the leash is not long enough.

When Fiona comes home from school, she goes out into the backyard and sees the leash, stretched taut from the tree in the middle of the yard, slicing up diagonally across the sky, up to the top of the fence, where it disappears from view.

That night the house is gently rumbling with the sounds of shouting in the other room, alternating with biting clips of poisonous words. Fiona lies awake between her chilly sheets and watches the moonlight trace a path across her bedspread through the window. If she shifts her head and looks into her tilted vanity mirror, she can see the backyard, the gray lawn and the small lump of freshly turned earth, with a little cross poking out of the ground, two spindly sticks tied together.