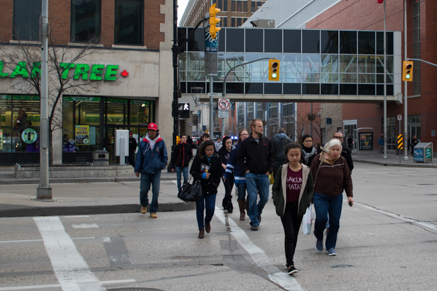 On Nov. 14, Winnipeg commuters witnessed two pedestrian-road crashes. One was at the intersection of Kenaston Boulevard and McGillivray Boulevard, which resulted in a fatality, and the other was at the intersection of Morley Avenue and Osborne Street. Days later, another pedestrian was hit by a car at the corner of Osborne Street and Wardlaw Avenue. These recent pedestrian-road crashes only highlight the necessity for our city to catch up on improved and safer roadways. This is especially important when you consider the fact that almost 50 per cent of pedestrian fatalities in Manitoba happen when the pedestrian is crossing an intersection.

It is no doubt that road safety is a public safety issue, and as our city continues to grow, the urgency for an improved road safety strategy is only becoming more and more apparent. Many have advocated for the city to adopt Vision Zero, including city councillor Janice Lukes.

Vision Zero is a road traffic safety project, first implemented in Sweden back in 1997, that aims to completely eliminate traffic deaths and serious injuries. This long-term strategy is applied through making changes in road safety rules and regulation, improving road infrastructure, and designing roadways that lessen the risk for motor-vehicle crashes. The project even includes implementing changes to the culture of traffic-safety – such as highlighting the importance for drivers to be more attentive and cautious of speeding. In Sweden, Vision Zero has been a massive success. It is high time Winnipeg follows that lead.

Sweden is now known for being home to the world’s safest roads because, despite experiencing an increase in the number of cars driven in Swedish roadways since 1970, the country witnesses fewer than three traffic-related fatalities for every 100,000 Swedes. In comparison, a 2014 report by Transport Canada reveals that, per 100,000 Canadians, there are 5.2 traffic-related fatalities.

In January of this year, Canada adopted Vision Zero as a federal strategy, but it has yet to be implemented in our cities. Edmonton became the first Canadian city to adopt Vision Zero when its city council approved of the plan in 2015.

Prior to its adoption of Vision Zero, Edmonton created an office for traffic safety – the first in North America – and in spite of the population growth, the changes made by this department to improve road safety have resulted in a significant decrease in traffic related injuries and deaths since 2006 – a drop of almost 53.5 per cent. Ten years later, as part of its Vision Zero goal to continue reducing traffic injuries and fatalities, Edmonton has spent nearly $5.7 million to upgrade 30 intersections known for their high collision rates. These changes include improving pre-existing pedestrian crossings and building new ones, installing turn-on-the-arrow-only left turn signals, upgrading school safety zones, and installing digital driver feedback signs on more and more highways. The $5.7 million spent on these changes has been funded entirely through photo radar tickets.

We are far too physically vulnerable in vehicle collisions to play chance with fate – the likelihood of surviving an injury if struck by a car travelling at 60 km/h is very slim. It falls on us to make policy changes toward increased road safety and provide strategic investment in order to ensure safer and more secure roadways for pedestrians and drivers alike.