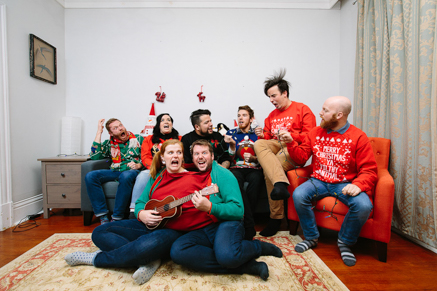 The Winnipeg Comedy Showcase (WCS) is one of Winnipeg’s most popular comedy events. It started two years ago, when Kevin Mozdzen, who works as a media personnel for the Park Theatre alongside being the founder and artistic director of the ODDBLOCK Festival, contacted local comedian Jared Story to discuss how the Park Theatre could contribute to Winnipeg’s comedy scene.

Story began the WCS as a weekend comedy showcase as opposed to the weekday bookings that comedians usually have. He decided to make it a quarterly event that features six of Winnipeg’s most talented comedians, both new comers and veterans, delivering their best material. There is no underlying theme or category that performers have to abide by. The only restriction is that the same comedian cannot perform on back-to-back shows, allowing for a wider variety of comics.

The first WCS took place on Jan. 24, 2014 and sold out two weeks in advance. Since then, most subsequent shows have sold out. Story hopes to build on the showcase’s success with the upcoming 12th edition, which takes place Dec. 16 at the Park Theatre.

“We may have stumbled across this format, but we must be doing something right,” said Story.

Burdett has over ten years of improv experience. For six seasons, she performed a weekly improvised soap opera with local improv group Soap Scum Presents, and made her stand-up debut at Dana Smith’s Women’s Open Mic last year. She draws influences from goofy, honest, silly performers, like Amy Poehler, Bo Burnham, and Kate McKinnon, to name a few. Being a comedian who is able to talk and joke about difficult scenarios has helped Burdett get through some tough times.

“If by talking about some tough stuff for me can help someone else, that makes me really happy. Like, if someone sees me and thinks ‘aw, man, yeah! These dating situations and living alone stories make me feel better knowing that someone else is going through them!’ that makes me feel really good,” said Burdett.

In a similar fashion, BUCKO’s Lauren Cochrane finds comedy to be a great medium to connect with others. She draws personal influences from the likes of comedians such as Catherine O’Hara, Maya Rudolph, Molly Shannon, and Lucille Ball.

“[Comedy] appears naturally everywhere if you look for it. It’s one of the best way to communicate and tell stories. Humour can disarm people so they are more able to listen. You can slip a lot of life lessons in comedy,” said Cochrane.

The 12th Winnipeg Comedy Showcase will take place on Friday, Dec. 16 at the Park Theatre. Tickets are $10 and can be purchased at the Park, Music Trader, and Ticketfly, as well as from any of the comedians on the bill. Doors open at 8 p.m. and the show starts at 9 p.m.