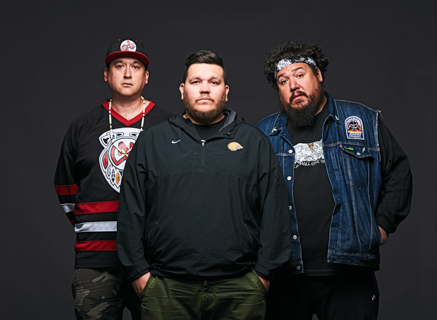 Formed in 2008, Canadian electronic music group A Tribe Called Red (ATCR) is made up of  three Indigenous DJs: DJ NDN, Bear Witness and 2oolman. The group produces a unique style of music that is now being called “pow-wow step.” Their music combines elements of electronic music and hip-hop with traditional Indigenous drum beats and vocals.

On Sept. 16, ATCR released their third album, We Are The Halluci Nation, and it is by far their most dynamic, political, and thought-provoking album yet. The musical trio explores the brutal history of colonialism throughout the album, all while maintaining a sense of hope for the future and change.

We Are The Halluci Nation delivers danceable, infectious tracks that incorporate elements of dancehall, hip-hop, Indigineous electronic dance music. It is laced with meaningful lyrics sung over pulsating drum beats and unique sound combinations. The featured artists add their own touch to each track without resorting to mainstream tinny vocals.

The album features interludes of phone calls from a man trapped in Alie Nation correctional facility, voiced by Joseph Boyden, author of The Orenda, offering a glimpse into the oral history of the impact of residential schools and poverty on the Indigenous community.

As a signature of ATCR’s music, the iconic Indigenous drum beats and vocals are pervasive throughout the whole album. This is prevalent in Tanya Tagaq’s featured spot on “Sila.” ATCR integrates Tagaq’s Inuit throat singing into the track to make it sound like another layer of instrumentals at times and vocals at others. Nevertheless, there are more mellow and soft-sounding tracks on the album as well, such as “The Light,” featuring Lido Pimienta, and “Eanan,” featuring Maxida Märak.

On We Are The Halluci Nation, ATCR showcases their musical prowess as the album goes from intense spoken word over drum beats, to dance music, to contemplative, more mellow electronica, all tied together by the philosophy and innovative style that has become synonymous with ATCR.

We Are The Halluci Nation offers protest through music. It is a showcase of Indigenous talent. At times the lyrics may prove hard to swallow – cue Joseph Boyden’s interludes about harrowing experiences in residential schools. However hard to swallow, these words need to be heard.

We Are The Halluci Nation manages to be equally danceable and thought-provoking. Despite being politically inspired, it also stands its own ground musically as a thoroughly enjoyable album to listen to.

We Are The Halluci Nation is available on iTunes and Spotify. A Tribe Called Red will be performing at the Garrick Centre on Dec. 3. For ticket details, visit atribecalledred.com/tour