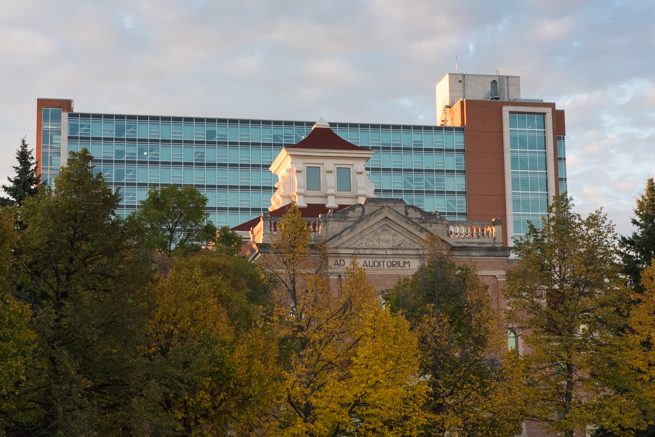 First Sunrise of Fall over the Quad, September 2016

On Oct. 27, the University of Manitoba Students’ Union (UMSU) council discussed whether to take a stance on the precarious negotiations that have been ongoing between the University of Manitoba Faculty Association (UMFA) and the administration since May. Meanwhile, on Oct. 14, UMFA issued a strike mandate that held 86 per cent approval among membership who voted over the course of a three-day poll.

The potential of a strike, said many an UMSU councillor, is a very serious matter that requires the union to tread with the utmost caution. It is with this attitude that the council reached a stance that simply isn’t one at all.

Choosing to remain effectively neutral, UMSU council came to a resolution that states it “recognizes the importance of UMFA’s demands as it pertains to quality of education for its students,” but ultimately encourages individual student body associations at the faculty level to assess the situation and come to conclusions of their own.

At best, neutrality is a tepid course of action for UMSU to take. At worst, it’s total strategic incompetence. It is not the Arts Student Body Council, nor that of science, nor engineering, that occupies the political presence required for the student voice to be meaningfully heard by those at the bargaining table.

Quite frankly, UMSU’s failure to take a definitive stance on such a critical issue is an institutional embarrassment. This is yet another mark in a series of devastating blows against the union’s credibility as an advocacy group for students.

The entire purpose of a union is to advocate in its members’ interests, so when there is a failure to perform that single task, one must wonder why it exists at all.

One does not have a union so it can spectacularly bungle its finances to the point of running a $690,000 operating fund deficit, as UMSU did in its last fiscal year. Perhaps if UMSU was successful in its main governing principle – that is, to ensure quality education that is accessible to all through “member mobilization, lobbying, advocacy, research and analysis as well as sustained and direct action” – then the six-figure deficit wouldn’t be so outrageous. Instead, UMSU has consistently failed in its advocacy programs of late. These range from proclaiming neutrality during budget cuts to its only recently resolved three-year cat fight with the Canadian Federation of Students (CFS) that cut off students’ access to the federation’s campaigns and services. It is most egregious that U of M students have time and time again been left in the dust by the union that is meant to exist solely for their benefit.

Being among the largest undergraduate student unions in Canada, it is not unreasonable to expect UMSU to be a political heavyweight and actually achieve results for students. And by achieving results, I do not mean passing a back door tuition raise in the guise of a fee levy that is then passed off as a “student donation” to a glitzy multi-million dollar capital project. Nor do I mean assuming neutrality when the administration announces sweeping budget cuts to academic operations while simultaneously running said multi-million dollar capital project.

Unfortunately, these are past endeavours, and to ruminate on them does only the melancholic any good. On the other hand, there are things UMSU can do moving forward for the betterment of the students it represents: namely, UMFA’s embroilment with the administration over collective bargaining. Ultimately, the issues at play all boil down to the quality of education being provided at the U of M. Even if UMFA is just acting in the best interest of its membership, as a union does, their demands if met will contribute to a better educational environment for students.

One need only consider the administration’s past actions, those that have worked to undermine the U of M’s quality of education. An example of this is the implementation of quantitatively based performance metrics that have harmful repercussions for academic freedom and the ability of professors to interact with students. These performance indicators bias popular research by heavily weighting top publishing journals and using the number of citations an author receives as indicative of career success. When these measures become tied to things like tenure track and research grants, the financial viability of professors conducting vital work on the fringes of academia is rendered null. This manifests in practice as an administration that cares more for marketability rather than quality, in-depth research, adventurous scholarship, and the academic relationship between students and professors.

More worrying is the fact that the administration has totally sidelined UMFA’s proposals regarding collegial governance. As students, we should be concerned that our administration is intent on freezing out professors from having a meaningful say in the direction of the university. This is given the fact that our education is entirely reliant on the ability of faculty members to teach and perform research at their professional discretion in the fields of study they have dedicated their lives to.

UMFA, and not UMSU, is the only union on campus that is currently standing in staunch opposition to the university’s treatment of education as a cheap commodity. This is the final chapter of the administration’s austerity agenda.

If our union is not going to launch its own offensive front, then the least it can do is support the union that has. In this case, it is UMFA’s collective agreement proposals and recent strike mandate that UMSU should be in the business of backing.

Hiding behind fallacious economic reasoning, many claim UMFA’s salary demands at the bargaining table are not financially sound and then conclude the position is unconscionable. This is clever posturing that certainly has public relations directors in administration jumping for joy, as it conveniently fails to mention the fact that salary is only one of many issues for UMFA. The purpose of the union’s strike vote in October was to signal to the administration that UMFA felt as though their concerns regarding collegial governance and professorial workload were not being taken seriously.

Our university would have faculty be part-time professors and full-time administrators. This is the logical consequent of the administration’s frenzied cuts, which has resulted in dramatically increased administrative workloads for staff without adjustments to compensation.

The way administration has professors juggling full course loads, their students, and their research has made academia into a circus act. The clown in all of this, however, is UMSU, who fear taking a stance on negotiations between UMFA and the administration because of how a long strike may impact select students. But it’s students who have the most to lose if the administration continues to overwork professors and continue directing its finances away from the academic operations of the university.

UMSU needs to realize the stakes, rescue its advocacy role, and take a hardline stance on behalf of students. This starts by fighting for quality education provided by accessible professors. Supporting UMFA’s strike mandate is more than a matter of union solidarity. Rather, it has to do with the fundamental nature of education: the dialogue between student and professor.