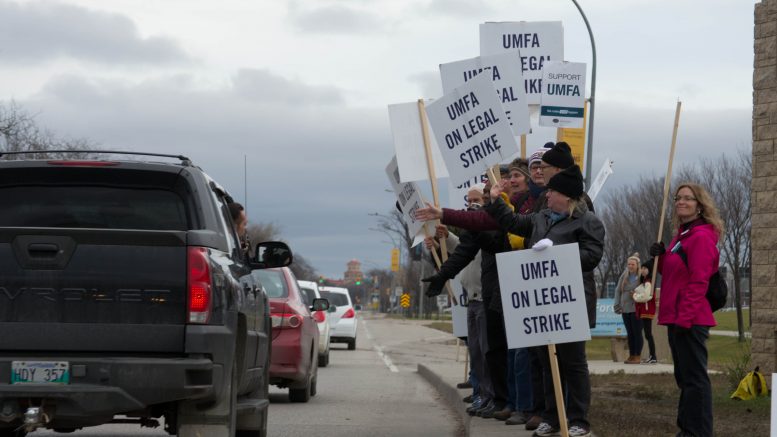 The University of Manitoba is insisting that a settlement offer rejected by the leadership of its faculty association more than a week ago be put to a membership-wide vote after conciliation sessions broke down this weekend.

In a release issued Sunday, administration said negotiations with a provincially appointed conciliator failed to bring the two sides closer to a new collective agreement and called on the University of Manitoba Faculty Association (UMFA) to let its members vote on a Nov. 6 offer that was unanimously rejected by the association’s bargaining team.

The union’s collective agreement committee – made up of about 20 members representing a breadth of faculties and departments from both the Fort Garry and Bannatyne campuses – met Monday, reaffirmed the offer falls short of meeting UMFA’s long-standing bargaining priorities, and decided against calling a vote.

“We’re going to keep asking them to take the offer we made last week,” said John Kearsey, the U of M’s vice-president external.

“We don’t know what else to do right now because we feel that we have done everything possible to try and end this strike,” he said. “We have presented offers that have shown significant movement.”

UMFA has been picketing since Nov. 1, cancelling hundreds of classes. Negotiations toward a new agreement have been ongoing since May after the previous three-year contract expired March 31.

When the latest offer was turned down more than a week ago, UMFA president Mark Hudson said the proposal does not adequately address workload, job security, and performance assessment concerns critical to the association.

He said this week that conciliation was progressing and the first he heard of talks breaking down was after the university issued the release on its online communications arm, UM Today.

“It kind of felt like they had just taken their ball and gone home,” Hudson said.

“We think that students and their families expect us to be at the bargaining table getting this thing done rather than trying to turn back the clock a week to get our members to vote on a proposal that they have already seen and which our collective agreement committee rejected unanimously as having completely and utterly failed to address any of our issues.”

“This whole idea that they are somehow bargaining with themselves or that we won’t accept anything that is put across the table, for them to say that and then throw their hands up and walk away from the table – it’s a hissy fit,” he said.

“We think they should take this seriously. They owe it to students to get back to the table and really negotiate.”

UMFA, which represents some 1,200 professors, librarians, and researchers, filed a complaint with the Manitoba Labour Board last week claiming the university is failing to bargain in good faith after it withdrew a proposed salary increase.

Both UMFA leadership and the provincial New Democrats have accused the Progressive Conservative government of interfering in collective bargaining after the province directed the U of M to renege on its salary proposal and extend the existing contract an additional year.

Short of seeing the Nov. 6 proposal put to a membership-wide secret ballot, Kearsey said the university will not return to the bargaining table unless the association significantly changes the language of its demands concerning teaching assignments and workloads.

He said the association’s proposal strips deans of the final decision-making authority in favour of an arbitration scheme in the event of a conflict with faculty.

“We have seen no give from the very staunch position that they have taken that we can’t accept,” he said.

The conciliator overseeing negotiations last week proposed setting aside the outstanding issues for arbitration to foster a return to classes but the union would not agree.

Hudson said the union accepted arbitration on similar issues to avoid a strike during negotiations in 2013. However, he said when sessions began the university argued the administrative governance matters were outside the arbitrator’s authority.

“Our history with the University of Manitoba in arbitration is not a great one,” he said. “We know pretty much what they will say to the arbitrator – that the arbitrator can’t really rule on these issues.”

“We might as well fold up our tents immediately and go home if we’re looking at arbitration.”

Kearsey said that by refusing arbitration now UMFA is contradicting its own workload protection proposal which calls for an arbitrator to settle disputed workload assignments if a solution can’t be reached.

Given that a one-year contract would only run until the end of March and a third full week without classes could result in the cancellation of the winter reading week, Kearsey said he would prefer the two sides strike a sort-of bridge deal to get students back into the classroom while the outstanding issues are addressed.

“We could sign this collective agreement and we could get people back in the classroom and we could engage in a meaningful, thorough, collegial discussion around these two issues and leave the students out of it for now,” he said.

“This is not rhetoric, it’s not spin. It’s nothing like that. This is about getting our students back in the classroom.”

As of now, no meetings have been scheduled.

Kitty Fitzgerald: U of M’s writer-in-residence