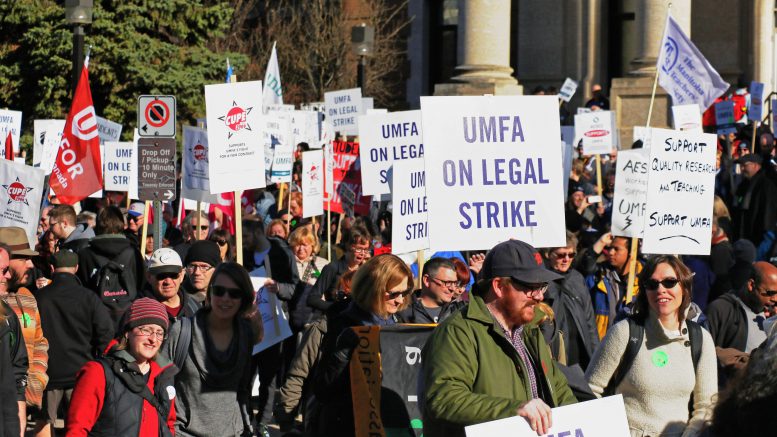 As regular classes resume at the University of Manitoba following a three-week faculty strike, students are coming to terms with the revised academic calendar.

Shortly before administration and its faculty came to an agreement and the 21-day strike was called to an end last week, the U of M senate approved an adjusted academic schedule extending the fall term into January and pushing the beginning of the winter term back several weeks.

Voluntary withdrawal dates for both uninterrupted and strike-affected classes have been moved to Dec. 1 and Dec. 7, respectively.

Classes uninterrupted by the strike will end on the regularly scheduled Dec. 9, with an exam period scheduled for Dec. 12-22. Strike-affected classes will run through until Jan. 6, with a Jan. 9-17 exam period.

The holiday break remains unaffected and the university will be closed for holidays between Dec. 23 and Jan. 2.

The modified winter term kicks off Jan. 18 and runs until April 21. While a tentative schedule released prior to the resolution had the winter reading week on the chopping block, the mid-term break was salvaged and will run from Feb. 21-24.

The new schedule – which will see strike-affected classes continue through the exam period for continuing courses – has been a source of stress and concern, according to some impacted students.

Bailey Wilson, a first year film studies student who had three out of her four classes interrupted by the strike, said she became concerned as the strike dragged on.

“I thought [the strike] was a good idea but I started to become a little anxious towards when it started going to the third week,” she said.

“I didn’t want anything to be affected and I wanted to go through the first year without any kind of stress.”

Second-year engineering student Jerrod Alcantara said that while he supported the faculty in its strike, the disruption was an inconvenience and created uncertainties for students.

“It is easy to complain about the strike and everything that has happened but if you are to put yourself in the position of the professors, I can definitely see why they were upset and then went on strike,” he said. “I was in support of the strike but at the same time I do feel bad for some of my fellow students it may have caused a lot of stress.”

According to Laura Conrad, another first year arts student who had two of five classes disrupted, professors have been supportive in managing the amended deadlines.

“This week is really busy now because all my assignments and tests were rescheduled for this week,” she said. “They adjusted the assignment dates and they were very supportive.”

Danielle Diona, a fifth year student in the faculty of health sciences who had all her classes continue during the strike, said that while she has not been seriously affected by the disruption, she has friends whose holidays are going to be more stressful as a result.

“I am glad that they got the deal,” she said. “[But] I feel bad for my friends – they were affected and they don’t really get a chance to relax after the term because the term is not over until late January and after that they have to go back to class again.”

Katie Kutryk, a health and wellness educator with the university’s student support centre, said there has been no significant increase in the number of students seeking support during or after the strike.