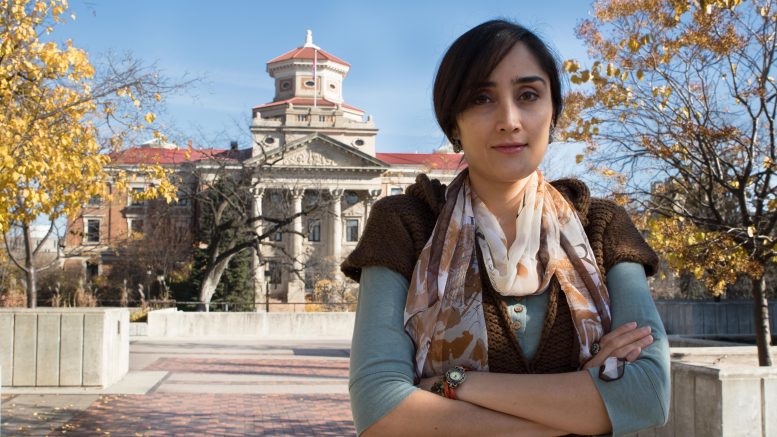 Zahra Baseri, is this year's regional winner for the province of Manitoba for her submission, Outcry. Photo by Star Roxas

When Zahra Baseri left Iran to study art in Manitoba, her goal was not to simply create pretty things. She wanted to use her creations to showcase her critical views and perspective of her cultural background. Today, the University of Manitoba alumna’s award-winning piece Outcry #3 is a part of her ongoing artistic series of paintings confronting gender inequalities in Iran.

Earlier this year, Baseri submitted this piece for the BMO Financial Group’s 14th annual BMO 1st Art! Invitational Student Art competition. The competition showcases works of student artists from universities across Canada. Her piece won the regional award for Manitoba, and she is up for the national award as well.

Baseri is an advocate of freedom. She believes that being able to decide how to present oneself is a key facet of freedom. In Iran, wearing the hijab is mandatory and women are required to shroud themselves in loose clothing. The government recommends women wear black chador – a very loose-fitting piece of typically black fabric.

Baseri believes that Iranian women are silenced in her home country, and she is speaking out against this issue through her piece.

“Imposing a restrictive dress code in the name of religion onto certain groups in society, women in this context, is violating human rights – violating women’s rights,” Baseri said.

Outcry #3 consists of eight photographs of Iranian women hidden behind black frames of 8mm plywood. She designed them using Adobe Illustrator and engraved them with lasers. The black frames have motifs characteristic of Islamic architecture.

In addition, the frames represent the black chadors Iranian women have to wear. Baseri said the frames are meant to play a similar role as the chadors by masking the women. For her, the art is an opportunity to have other voices be heard.

“There are lots of voices that have been condemned to silence, and I thought I could bring it into my art,” said Baseri.

Outcry #3 will be exhibited at  the Justina M. Barnicke Gallery at the University of Toronto from Nov. 17 to Dec. 17, along with the twelve other regional winners from each Canadian province and territory. The first two installments of the Outcry series – a painting and a 3D sculpture – were featured in Montreal’s ArtMûr exhibition “Fresh Paint/New Construction 2016” over the summer. Baseri said she will continue to add more pieces to the Outcry series.

Being featured in the Art! Invitational Student Art competition has given Baseri the exposure and the acclaim she needs to make a strong entry into the art world after her undergraduate studies.

Baseri advises young artists to pursue what they are passionate about and explore their own personal identity, and channel that through their creativity.