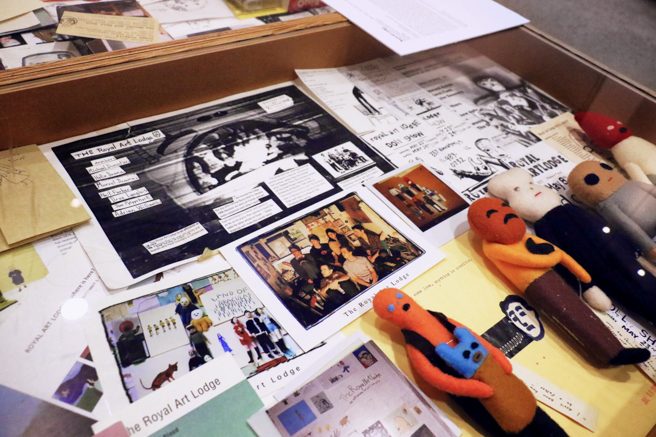 The Collections Gallery at the University of Manitoba’s school of art gallery is currently housing a special exhibition that highlights the city of Winnipeg’s arts history in a unique way. The exhibition, which is titled There’s More Than One Way, features artworks by local collectives from the city’s history.

Organized by Winnipeg-based writer, curator, and artist Kegan McFadden, There’s More Than One Way is presented in conjunction with the 20th anniversary of the Centre for Contemporary Canadian Art – a not-for-profit organization that recently organized a symposium called The Winnipeg Effect: Should I Stay or Should I Go? For McFadden, this exhibition is a way to showcase the city’s artistic history.

“I was asked to curate the exhibition as part of [The Winnipeg Effect] symposium that attempted to look at various parts of Winnipeg’s art history and the effect it has had on Canada,” Mcfadden told the Manitoban.

“Having worked here for over a decade, I’ve heard of various collectives and have known a lot of the artists personally who make up this show. I wanted to recognize the numerous art collectives that have been producing work in Winnipeg over the years.”

Some of these collectives have been famous for their moments in history while others may not be so memorable. Nevertheless, each of these collectives made significant contributions that have paved the way for the growth and development of Winnipeg’s arts community as we know it today. The exhibition features artefacts, art works and fixtures that highlight the contributions they made over time.

“Some collectives I am naming for the first time – like Mondo Trasho, a group that got together for a few months in 1978 to form a punk band out of Plug In Gallery. Mondo Trasho has lived very large in the memory of Winnipeg’s downtown art community – some even mistaking it for Plug In’s ‘house band.’ But the truth is that they only performed once,” said McFadden.

“I’ve just edited a book that collects all of that material: photos, set list, original lyrics, and promotional materials. The book is published by As We Try & Sleep Press and is part of the show alongside some of that material. This is the first time since 1978 that anyone has seen this material.”

“There’s also a political aspect to this show. The collective Average Good Looks formed in the early 1990s as a reaction to a gay bashing that took the life of a local man. They went on to challenge homophobia through public art pieces that inhabited to realm of mass media. They used billboards and other public spaces to send their messages,” said McFadden.

“I think now, in light of a lot of right wing sentiment, we must remember that artists have a voice and that there can be dissent.”

McFadden believes students will find that this exhibition exciting as it connects history with the present. Many of the collectives includes artists who have either been students or professors at the University of Manitoba.

“I think it’s important for students to realize they are being taught by professional artists – artists with histories, with active practices. This show is just one way of contextualizing that information,” said McFadden.

“In a serendipitous way, there’s a little bit of history repeating: the Royal Art Lodge formed during the faculty strike on campus in the mid ‘90s and now 20 years later we’re amidst another strike. Perhaps there are some students, somewhere, huddled together plotting a new collective? I hope so anyway.”

There’s More Than One Way is on display at the Collections Gallery in the University of Manitoba’s school of art until Dec. 5. On Dec. 1, an exhibition tour of the show will be held. For more information, visit www.umanitoba.ca/schools/art/799.html