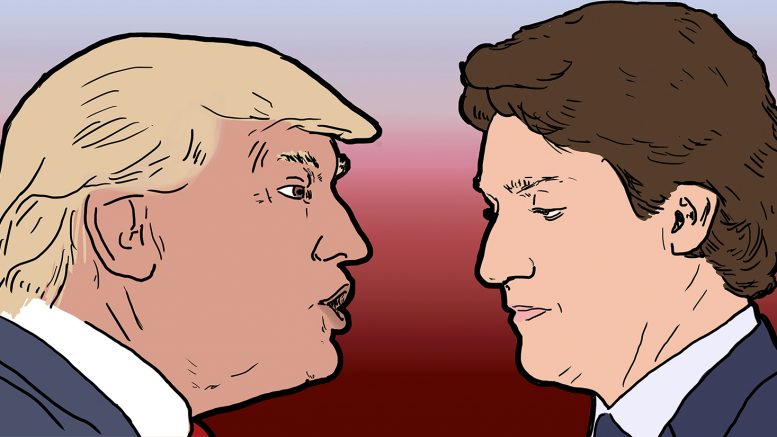 In what was a disastrous and outrageous presidential election, Donald Trump won America’s heart by riding on hate and fear, becoming the first not-qualified-to-be-president-president of the great U.S.A. He is also a sexist, racist, wall-building, climate change-denying, tax return-stashing, company-bankrupting, hate-spewing demagogue with a puny set of hands that, months before his inauguration, have already been put to use picking apart American political stability piece by piece.

Tapping into America’s worst impulses with his “Make America Great Again” mantra, Trump is an embarrassment to the political credentials of the United States. But Trump’s victory has also become an ode to the Democratic Party’s miserable exercise in champagne liberalism. Fundamentally, they rooted for a candidate who offered no tangible change to an electorate desperate for exactly that. Instead, the Democrats were concerned with protecting corporate interests and have long lost touch with the American people.

Among his campaign promises, Trump has vowed to remove illegal immigrants, repeal Obamacare, ban Muslims, defund Planned Parenthood, end gun-free zones, suspend Syrian refugee resettlement, appoint a conservative pro-life Supreme Court justice, and build a great, big, beautiful wall between Mexico and the United States. These are terrifying policy plans with serious domestic repercussions. But considering how the United States and Canada are so deeply interweaved in many ways – language, culture, regulation, trade, international relations, etc. – we must also ask ourselves: what does a Trump presidency mean for Canada?

Other than crashing our immigration website, experts predict that Trump will affect Canada on three fronts: trade and economy, security, and climate change.

Trump has spent his election campaign brutally criticizing Hillary Clinton for her husband’s signing of the North American Free Trade Agreement (NAFTA), which he eloquently called the “worst trade deal ever.” Trump has taken a strong anti-trade position, so it is important to keep in mind that 23 per cent  of our GDP is comprised of goods and services exported to the United States. Renegotiations or new agreements would inevitably have great consequences on Canadian businesses and trade.

Since the War of 1812, Canada and America have for the most part been in agreement on approaches to international issues, from the Cold War to the conflict in Syria. However, because Trump has offered no practical foreign policy plan – he’s said he doesn’t want ISIS to find out what his plans are – many experts are still unsure as to what Trump’s presidency means for Canada and America’s relationship on the international security front, leaving Canada in an awkward position of uncertainty. Most believe, however, that Trump’s administration will push the Canadian government to increase its expenditure on defence .

What most are worried about is what Trump’s presidency will mean for climate change. Calling global warming a Chinese hoax, Trump has promised his voters that he would pull the United States out of the Paris climate change agreement, a definitive blow for Canada as America’s closest ally. Additionally, Trump may end Obama and Trudeau’s agreement to lower methane emissions. He might also bring back the Keystone XL Pipeline, which is supported by Justin Trudeau. Despite the devastating consequences if built, the Canadian government will likely welcome the pipeline with open arms under Trump.

There are more things than policy to fear under a Trumped-up America. It is, perhaps, the emergence of a new political culture revolving around Trumpism that we should be most on guard for.

Congratulating Donald Trump on his win, Prime Minister Justin Trudeau put out a statement promising to work “very closely” with Trump and his administration. Ex-prime minister and current member of the band Van Cats Stephen Harper posted a tweet congratulating Trump on his “impressive victory” calling for a move forward on the Keystone Pipeline project. Most worrying, however, was Conservative party leadership contender Kellie Leitch’s response. Leitch sent out an email to her supporters hoping to spread Trump’s “exciting message” to Canada. This is not okay.

In the 24 hours following the election results, a wave of hate crimes against minorities has swept through America. My worry is that Trump’s presidency will provoke hate crimes across Canada and would similarly embolden racists and hate-mongers as has happened in the U.S.

Nearly two years ago, Maclean’s framed Winnipeg the most racist city in Canada. This may have been reaffirmed when a nationwide poll conducted by Mainstreet/Postmedia found that Manitoba has the highest proportion of Trump supporters across Canada. We need to pay attention to this. We cannot remain complacent, and we’ve got to stop expressing relief about not being American. We need to shake off this smugness because, while we may assume otherwise, we are not really any better. We too have issues that require a much closer eye than what the myopia of late has provided. We cannot take freedom and democracy for granted.

Iran, the NPT and American hegemony