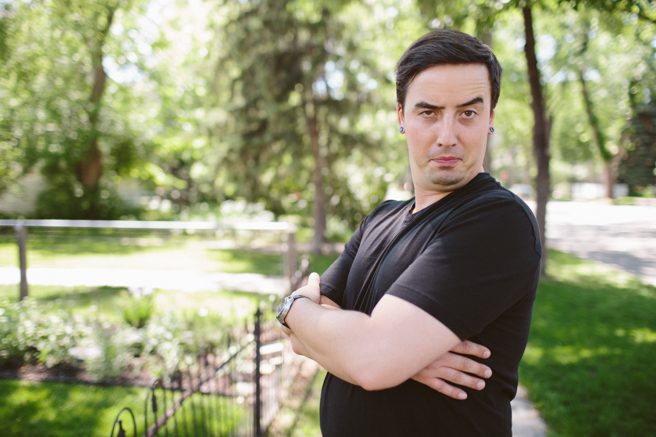 Winnipeg comedian Tim Gray is set to record his first comedy album, titled You Gotta Laugh, at the Park Theatre on Nov. 26. The set will feature well-known local comedians Melanie Dahling, Jordan Welwood, Matt Nightingale, and Dana Smith, who have performed on several stages locally and across the country.

Gray is a member of the local sketch comedy group H.U.N.K.S., and alongside director and fellow H.U.N.K.S. member Rory Fallis, Gray is creating and presenting a comedic experience the city has never seen before. The nature of the showcase will follow his physical style of comedy, which involves slapstick and miming.

“I’ve designed the comedy album to acknowledge and embrace the physical aspect of my comedy,” said Gray.

“It’s going to be a conceptual stand-up comedy album. I’ll be playing with the form of a comedy album a lot. Hopefully, the secret twists I have planned will play out on the comedy album and help fill the blanks my physical comedy will create.”

Gray’s comedy career started at the University of Manitoba in 2008. He produced a monthly show at Degrees, a weekly radio show for campus radio station UMFM, and formed the U of M Comedy Club. Since then Gray hasn’t slowed down, and although his resume is chock-full of hilarity on many platforms, this will be his first comedy album.

“This will be my first endeavour in creating a comedy album of this nature. I have created three different radio shows and two podcasts. This experience has given me a strong appreciation for the art of recording audio,” said Gray.

“One of the comedy albums that is a major inspiration for me is Steve Martin’s Let’s Get Small and his other album Wild and Crazy Guy. He was also a very physical comedian and managed to transfer a lot of that humour perfectly into the audio form.”

Gray has performed countless stand-up, improv, and sketch comedy shows at venues all across Winnipeg. One of his recent projects is a successful monthly themed comedy show at Wee Johnny’s that has appeared on CBC’s Top 5 Things to do in Winnipeg on several occasions. In January 2017, this project is set to evolve into a weekly Friday Night Comedy Show which features Dana Smith’s Women’s Open Mic, improv performances, sketch skits, live podcast tapings and stand-up comedy.

Gray has become a familiar face at the Winnipeg Comedy Festival and most recently performed with Sean Cullen and Andy Kindler at the Alternative Comedy Show. In 2015, he opened for Canadian comedy legend Mark Forward. He performed in the 2015 and 2016 Oddblock Comedy Festivals, including this year’s Closing Gala alongside Kate Berlant, Brent Weinbach, and Matt Braunger.

Most recently, Gray traveled to sketch festivals in Montreal, Vancouver, and Edmonton with H.U.N.K.S. The Winnipeg improv troupe recently received their second five-star review from the Winnipeg Free Press for their show at the Winnipeg Fringe Theatre Festival earlier this year.

Gray is also producing weekly podcasts available on platforms such as iTunes, Stitcher Radio, and Google Play Music. If you have heard Gray on any of these platforms, you know that his show is not to be missed. The show will be a culmination of his career as a comedian as he will showcase his best works as well as new material.

“Some of the material I will have on the album I have been doing for six years. I have been working on my stand-up comedy voice for eight years now in Winnipeg. I’m largely trying to capture that content and style I’ve been working in over the past four years,” said Gray.

“There will absolutely be new and unheard material on the comedy album. I have some parts of the show that are intentionally left unplanned so that I can improvise in the moment.”

If you can’t make it to the show, you should expect minor delays in getting your hands on the material Gray will be performing. The comedy album is slated for a February 2017 release.

“My goal is to have it released by February 2017. I’m shopping it around to record labels, so that might affect when and where it will be released.”

Updates for the album’s progress will be shared on Gray’s social media pages.

To buy tickets for Tim Gray’s show at the Park Theatre on Nov. 26, visit myparktheatre.com/ticket-outlets