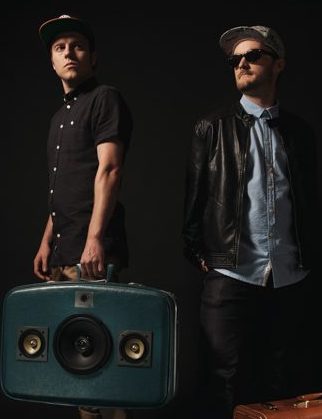 In many ways, 2016 has been a record year for Vancouver’s electronic dance music duo the Funk Hunters. The charismatic band is looking to close out the year with a festive and funky tour called Funk the Halls, which kicks off on Dec 8. The Funk the Halls tour bus will be making a stop at Winnipeg’s Park Theatre on Dec. 14.

The Funk Hunters is made up of Nick Middleton and Duncan Smith, two friends and DJs with a passion for dance music. The duo have pursued their passion and honed their craft, and this pursuit has led them to performing on over 450 stages across 16 countries. Despite that, they have had some of their biggest musical milestones in the last few months.

The DJs spent most of this year on the road and performed at different festivals including Burning Man, Pemberton Festival, Winnipeg Folk Festival, and Shambhala Music Festival. The highlight of their year was making their debut at the Coachella Valley Music and Arts Festival back in April. Duncan Smith believes this feat bodes well for their career and artistry.

“It has been a really crazy year for us. Every year, we continue building and getting more inspired,” Smith said. “Performing at Coachella was a dream come true. One thing about us is that we try to bring our best, our A-game, to a place like Coachella. As an artist, it was a real treat and as a band, it was a great place to experience music.”

The duo, with the help of four turntables, put on creative stage performances for their audience. They try to deliver a unique audiovisual experience with stunning custom-designed visuals and music. Their performances keep the audience engaged, intrigued and dancing.

“Our name has the word funk in it but ultimately, we love all kinds of music. Blending electronic music and hip-hop with other genres as well is something we love. It is interesting to us rather than just sticking to one sound,” Smith said. “Because of this, our music resonates with a lot of people.”

On Oct 14, The Funk Hunters and Chali 2na – a founding member of the hip hop group Jurassic 5 – released the ‘ILLECTRIC EP’ together. The collection’s two singles, “Word to Spread” and “Get Involved,” have garnered over 350,000 views across all social media platforms.

“As we grow as artists, we are constantly learning and evolving. We learn from our experiences performing on several stages and try to bring something new to the next show or tour,” Smith said.

“Funk the Halls started as one show in Vancouver last year. It sold out quickly so we added another show but this year, we decided to make Funk the Hall bigger and take it on the road across Western Canada. It is going to be great time for people to get out this Christmas and be together.”