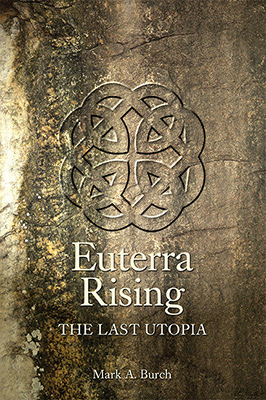 News outlets and social media updates constantly expose us to the downsides of modern civilization and the effects it could have on Generation Z. From environmental degradations, polarizing – and sometimes outrageous – political views, terrorism, and sustainability issues, the fate of our society can easily be likened to those dystopian movies and novels from the 70s – cue Logan’s Run.

In the midst of these realities, our imaginations serve as a refuge of inspiration and relief. Fortunately, Canadian author and transformational educator Mark A. Burch’s imagination has birthed his latest fictional novel, titled Euterra Rising: The Last Utopia.

Set in the 23rd century, Euterra Rising presents an utopia that speculates on what the world could be like post-internet age. It is a story of the countercultural values that could well be the norm in a future society. Following the collapse of consumer culture and a so-called ‘Great Forgetting,’ a new world develops and is founded on the bedrocks of Euterran civilization.

Burch’s Euterran civilization is neither apocalyptic nor post-apocalyptic; instead, it represents a near-apocalyptic time where current world value systems don’t hold any weight. Euterra is an intriguing time where people and communities must string together to come to grasp with their new existence and in the process, come to terms with nature.

The novel is outlined like a timeline with chapters representing a certain period in the 23rd century. This provides a unique perspective of cultural changes over time. Through strong character developments, it explores possible ways humans would survive in a world sans surplusage of common resources such as fossil fuels.

A plethora of refreshing ideas, plot twists, and suspense carries the reader along and through to the end of the book. The arrival of Euterra clashes with values of a former existence – the Brotherhood – and the collision of the two makes for a very strong plot.

A brilliantly written novel, Euterra Rising touches on themes of consumer culture, simplicity, and sustainability. These notions are neither easy to describe or fictionalize but, as a staunch advocate of better and stronger sustainability value systems, Burch does a good job of buttressing his views in one way or the other in this novel.

Burch, a retired director of University of Winnipeg’s Campus Sustainability Office and the former codirector of Simplicity Practice and Resource Centre, has previously published seven books on voluntary simplicity and sustainable livelihood. Euterra Rising expands on his ideals and vision for a world with lesser consumption rates.

Burch’s latest novel is compelling, intriguing, and capable of inspiring its readers’ imagination by providing a convenient escape from the realities of our trying and tiring society.

The official book launch for Euterra Rising: The Last Utopia will be on Nov. 19 at 7 p.m. at the McNally Robinson Booksellers (1120 Grant Avenue) and is available for sale on amazon.ca. For more information, visit www.markaburch.ca