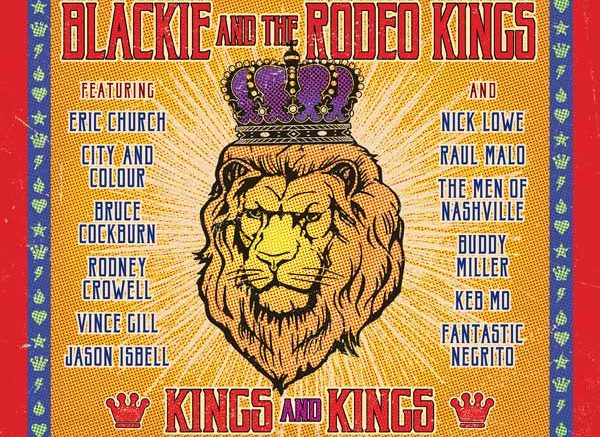 Since 1996, Hamilton, ON native band Blackie and the Rodeo Kings have been releasing folk-rock alternative country music and, in that time, have racked up a Juno award and several nominations. Their folk-rock sound is highly influenced by blues music and this is evident in their latest album, Kings and Kings.

The album, which is a companion piece to their 2011 collaboration album, Kings and Queens – which featured all female collaborations – features male friends of the band, such as Eric Church, Buddy Miller, and Vince Gill. These artists are masters in the musical world of roots, blues, and country.

One of the album’s stand out tracks, “Beautiful Scars,” features the familiar soothing voice of City and Colour’s Dallas Green and a slide guitar. Green’s vocal abilities are well suited for a country-influenced track and sets the pace for other songs on the album. The high-flying harmonies in “Playing by Heart,” which features the extremely talented and decorated musician Buddy Miller, along with the country twang, slide guitar, and organ/piano pieces create an excellent country tune.

From its first note and bass line, “Bitter and Low” – the album’s central tract – showcases the band’s inspiration from blues music. The Fantastic Negrito collaboration has blues sound poking through as his raspy and high-pitched voice. The track is the highlight of the album’s several genre-crossovers as it combines blues with punk rock.

Other featured artists on the album include Raul Malo, Nick Lowe, the Men of Nashville, and Bruce Cockburn. Each of the album’s 12 songs are collaborations, providing listeners with a unique perspective to every song. Together, they combine well to create a beautiful-sounding collaboration album.