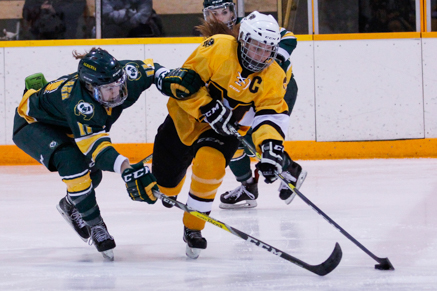 This weekend, the sixth-ranked University of Manitoba women’s hockey team took on the Alberta Pandas in a two-game series at home. They lost 4-3 in a shootout on Friday night, and were shutout 1-0 on Saturday afternoon. The Bisons are now 8-3-1 on the year.

The game was a tight checking affair, with neither side giving much room to breathe defensively. The Pandas built a three-goal lead, but the Bisons buckled down in the third with three straight goals to force overtime. They eventually lost in a shootout.

Alberta drew first blood seven minutes in, off the stick of Alex Poznikoff. Autumn McDougall got the puck low, and drove into the Bisons’ corner. She flipped a pass to the slot for a streaking Poznikoff, who fought off a check and deflected home her third of the year.

The Pandas extended their lead to two late in the second. After a power play expired, Amy Boucher entered the Manitoba zone, dropping the puck to Ashley Morin along the boards. She side-stepped a Bison defender and put a shot low blocker on Rachel Dyck. The puck rang off the post and in for Morin’s first of the season.

After Hannah Olenyk put the Pandas up 3-0 off a great individual effort, Alanna Sharman got the Bisons on the board. Sharman took a pass in the high slot, hammering the puck past Lindsey Post to cut the lead to 3-1.

Sharman drew a penalty the next shift, setting the stage for Karissa Kirkup to get the Bisons within one. After an extended sequence and a battle in front, the puck slid to Kirkup. She fired a shot through a crowd toward the Pandas net, for her first of the year.

Midway through the frame, the Bisons tied things up at three. Lauryn Keen fed an open Venla Hovi at the side of the net, and put it short side for her third of the season.

Two extra overtime periods couldn’t solve this one, as the two teams decided this in a shootout. The Bisons shooters got nothing from Post, who stopped everyone she faced. Olenyk played hero for Alberta, using a shimmy move and tuck in goal to steal the extra point from Manitoba.

After a week off, the Bisons seemed to struggle finding their skating legs for most of the game, but found them in time to battle back from the three-goal hole.

“We played more like we should’ve played all game,” Bisons head coach Jon Rempel said postgame. “I think mentally and from a maturity standpoint it was big to come back from three nothing down with sixteen minutes to play.”

Following a tough shootout loss Friday night, the Bisons were back on the ice looking for redemption against Alberta on Saturday. Manitoba struggled to get rolling shift after shift, and were stifled in a 1-0 shutout loss.

The Bisons had their legs early. They moved the puck and got deep in the Pandas end for extended stretches. Alberta was equal to the task, however, as they defended well and got lots of help from netminder Post.

A flurry of penalties in the latter half of the first saw the man advantage switch hands multiple times, but the Bisons remained strong. Manitoba had all the pressure, forcing Post to make some difficult stops.

The hard work payed off for Post and the Pandas, as Boucher broke the scoreless tie in the second period. Boucher scooped up the puck, entered the Bisons’ zone all alone, and after fighting off a check she was able to get a backhander on net through Amanda Schubert. The goal swung the momentum Alberta’s way, putting Manitoba on their heels.

This held up as the final score, as the Pandas swept the series. Manitoba walks away from the weekend with a single point, looking towards a better result next week.

A major point of concern this weekend was the play of the Bisons on the power play. They couldn’t finish on Saturday, going zero-for-five with the man advantage.

“I don’t think we were sharp in our playmaking. Particularly I didn’t think our power play was mentally sharp enough,” Rempel said postgame. “We adjusted well, tried to, but couldn’t do what we wanted against their [penalty] kill.”

The Bisons look to bounce back on the road next week against the University of Saskatchewan Huskies on Nov. 25-26.