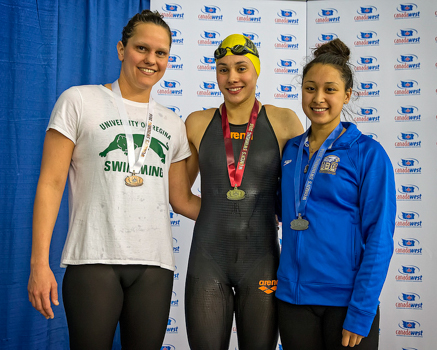 The Bisons had eight swimmers from both the men’s and women’s swim teams, but it was Alex Shogolev and Kelsey Wog who stole the spotlight this weekend. Wog especially had a stellar performance this past weekend in her Bison debut.

On the first day of the championships, Wog won the 50-metre breaststroke with a time of 30.54 seconds, setting the championship meet record. Both the men and women’s 4×100-metre relay teams came in sixth on the day.

Shogolev qualified for the U Sports national championships after he swam 23.14 seconds in the men’s 50-metre freestyle. Shogolev will be joined by second year swimmer Anthony Iliouchetchev, when he reached the standard time with a ninth place finish.

Wog was named the rookie of the meet after winning three gold medals and getting on the Canada West all-star first-team.

Bisons’ eight-game win streak comes to a halt, get swept in Brandon