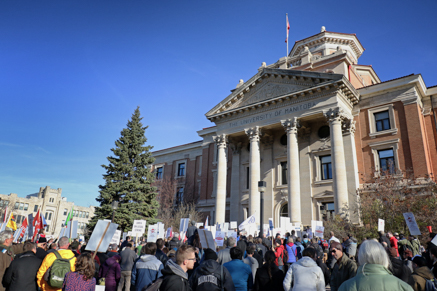 The recently resolved strike at the University of Manitoba has revealed a deep divide in the university community. The confrontation had reached a fever pitch with friends and colleagues pitted against each other in the political pressure cooker of a collective bargaining process. From my perspective as a student, I have never witnessed that level of frustration from my peers. This is understandable – students had their academic schedules upended with little insight into when bargaining was to be resolved. Typical of high intensity political situations, rhetoric and emotion often dominated the debate on both sides.

Despite what many people say, both parties genuinely believed that their decisions and actions would lead to a better learning outcome for students. Behind the talking points, UMFA and administration are dueling over competing visions for the direction of the university. As these divergent paths are fought over, students are often pressured to pick sides. While there are many passionate students who took different positions in this debate, the majority of students just wished that administration and UMFA would quickly reach an agreement. Most understand that both parties are essential to university governance and are doing what they think is best for students.

In last week’s issue of the Manitoban, political studies professor Radhika Desai penned a magnum opus of what many UMFA members feel that they are fighting for. It was the first time that this vision has been articulately expressed to the university community and is an appreciated contrast from the typical soundbites that were distributed on the picket lines. This ideology may be harder to communicate, but it is what should be expected of our academic thought-leaders in this public discourse. Faculty and staff had real concerns, such as rapidly increasing workloads and class sizes, but often these core issues are diluted with red herrings like attacks on administrative pay or the university’s marketing budget, which is relatively small when compared to other U15 schools. These are not issues that are even remotely central to the future of our academic institution and their use in the debate had distorted UMFA’s real cause. Yet this kind of messaging is consistently used because it is easy to understand and invokes an emotional response.

Similarly, we need the administration to more clearly express why they feel that the university’s strategic plan will make our degrees more competitive and result in a better learning environment. Administrative decisions are guided by our position in the market, government funding, and relatively low tuition rates. There are many good reasons for why decisions are made but it is not always communicated in a way that students can relate to. It must be acknowledged that there is a disconnect between students and actions taken at senior levels of administration. While this may just be a natural separation that will always occur, ideally, students would have an understanding of what the university’s priorities are. Fairly straightforward bargaining issues are not resonating amongst the student body and that should be cause for concern. The fact that a plurality of students do not see the relevance of department heads or deans having the ability to direct programming, for example, points to a more systemic gap between students and the administration.

The fundamental issue throughout this collective bargaining process is just how differently administration and some faculty see our university and its future. While competing narratives and viewpoints should always be welcomed, especially in academic environments, paths that are too divergent will become an impediment to progress. If both parties cannot reconcile their different visions and begin moving in the same direction, the school will become paralyzed beyond collective bargaining.

Now that this negotiation has ended, how will both sides pick up the pieces? No matter the outcome, the true test of leadership will be in how this relationship between the faculty and administration is repaired. The status quo has simply been unacceptable. If administration and faculty cannot learn to work together over the long run, ultimately, it will be the students that suffer.