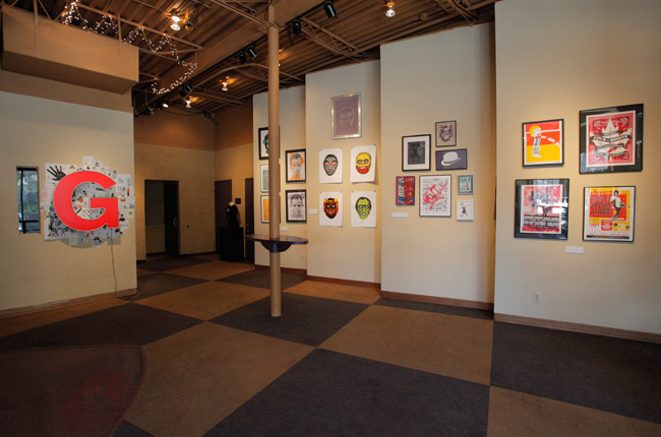 On Nov. 6, Winnipeg’s Gas Station Arts Centre will be brimming with talent as the centre showcases the 12th annual Girls! Girls! Girls! Gala. The gala, which started as an annual fundraising event for the arts centre, provides a space for female artists to showcase their works.

The theme of this year’s edition is Encore, and fittingly so, as there will be returning acts from past years. Artists and performers will reinvent old pieces, reinterpret themes of past years’ galas, and make previous acts and pieces their own.

The Girls! Girls! Girls! Gala is a two-for-one event: an art exhibition of around sixty pieces from twenty-five emerging and well-known artists, and a cabaret of various acts including theatre, contemporary dance, choir, and stand-up comedy.

The gala, which features exclusively female artists, celebrates and addresses the disparity of women in art. In recent times, great strides have been made to curb the menace of gender inequality in Canadian art communities. Many times, male artists are more celebrated and recognized than their female counterparts. More opportunities need to be made available for women to showcase their talent and creativity.

Karen Robb, a University of Manitoba alumna and one of the gala’s curators and artists, spoke to the Manitoban about the importance of this event and the need for female artists to be celebrated in a male-dominated profession.

“Making this [event] exclusively female highlights that [women] are strong in the art world and [are] able to hold [their] own in what, generally, can be described as a boy’s club,” Robb said.

In the past six years, the showcase has been overseen by Ruth Baines and Kim Zeglinski. Together, they have been producing the gala’s performances and managing the performing artists with the aim of celebrating women and putting on a good show.

“This is an opportunity for women to come together and say, ‘Let’s have a good time doing a really fun show,’” said Baines.

The gala will feature 18 performing acts who will present three-to five-minute long pieces. There will be performances by local contemporary dance company Gearshifting Performance Works, the Fu Fu Chi Chi Choir, the Dancing Spirit Drummers, and stand-up comedienne Cara Lytwyn, amongst others. The performances feature women from diverse backgrounds and will highlight the multifaceted versions of women and their art.

“We want the show to be Technicolor instead of all one note,” Baines said. “It’s an incredibly silly, serious, ridiculous, fun night. It’s everything rolled up in one.”

There will be a visual art show which will feature an eclectic selection of art works by established artists such as Darlene Drewniak, Holly Moore, Farrah Okolita, Sari Habiluk, and Juanita Klassen. The art works vary in styles, from pop art to classical art, and will be available for sale.

This year, the organizers have sought to make visual art sold at the gala more accessible to the public. All of the prints are limited to measuring 12×12, so more people will be able to find space for their purchases. In addition, the prints will be priced at $100 or less. This provides a great opportunity to purchase affordable art from both emerging artists and well-established local talent, who often sell their original pieces for thousands of dollars.

“Everyone wants to decorate their apartment, and they shouldn’t have to do it by IKEA alone,” Robb said. “[People are] actually going to be able to purchase a piece this year.”

Robb advises to arrive at the gala early if you are looking to claim a piece, as they will go fast. Purchasing art will support local artists as well as the Gas Station Arts Centre.

The Gas Station Arts Centre is undergoing a complete renovation and this gala serves as an opportunity to give back to an organization that has supported the arts community over the years.

The 12th annual Girls! Girls! Girls! Gala will be held Nov. 6. The art reception opens at 6 p.m. and the performances begin at 7 p.m. Tickets are $20 and available online or at the door. Visit www.gsac.ca for the full list of performers and artists, and additional information.