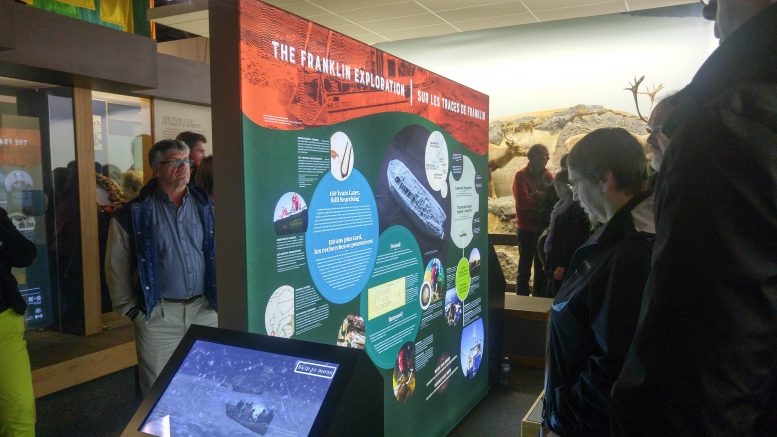 Guests of the Manitoba Museum read about the Franklin exploration after the Speaker series. photo by Chantelle Dubois

On Oct. 20, the Manitoba Museum invited Marc-André Bernier, manager of underwater archaeology at Parks Canada, to give a presentation on the archeology of the wrecks of HMS Erebus and HMS Terror. Bernier’s presentation drew in a full crowd at the event, filling every seat in the auditorium.

Both HMS Erebus and HMS Terror were part of the Franklin expedition in 1845. Led by Captain Sir John Franklin of the Royal British Navy, the expedition’s purpose was to explore the Arctic and map the undiscovered portion of the Northwest Passage.

The crew of the HMS Investigator became the first Europeans to cross the Northwest Passage. Its purpose in doing so, however, was to reach other expedition ships for rescue. The wreck of HMS Investigator was discovered in 2010 on Banks Island.

While the overall understanding is that the Franklin Expeditions had become lost – and that the crew perished in the hostile conditions of the arctic, turning to cannibalism to try and survive – discovery of the wrecks help historians piece together a more detailed story on what went wrong. By discovering both wrecks, Bernier says, “we’ll rewrite the whole story.”

In Oct. 2014, it was announced that the wreck of HMS Erebus had been discovered in the Wilmot and Crampton Bay. The ship was discovered further south than the original site that it was thought to have been abandoned, which raises questions on whether or not some of the crew had returned to the ship, or if it had drifted on its own.

As a country abundant with lakes, rivers, and surrounded by three oceans, it is no surprise that underwater ruins hold a considerable amount of valuable Canadian history.

Parks Canada has had its own underwater archaeology division since 1964. One of the main challenges that Canadian archaeology expeditions face in the Arctic is the limited time range in which searches can be conducted due to ice.

Bernier did note that climate change has increased the time available to search Canada’s Arctic, since the water remains open much longer now, but at a cost. While less ice sheet formation has given his team more time to search for wrecks, it has put the HMS Erebus at risk of further damage due to prolonged exposure to underwater elements.

In 2008, the Government of Canada partnered with multiple organizations to conduct the first search for the original expedition ships. The search for the ships not only involved the use of skilled divers and sophisticated sonar equipment to search the arctic floor, but also cooperated with Inuit people who include one of the ships in their oral history.

Very recently, on Sept. 3, 2016, it was announced that HMS Terror was discovered off of Terror Bay of King William Island. The discovery was assisted by an Inuk crewmember on an Arctic Research Foundation vessel who had recalled seeing a ship mast sticking out of the water six years prior.

One of the important pieces of information that Bernier’s team had in identifying the ships was the ship plans for the ship’s original build, as well as the modifications that were made for when they set sail to explore.

Sonar scans of the discovered wrecks were compared to ship plans, which matched up and helped with a positive identification. Other imaging techniques and scans are currently being used to help investigators develop diving plans.

Further investigation to the site of HMS Terror is still underway, but the HMS Erebus has so far proven to be abundant in artifacts.

Put down that bacon