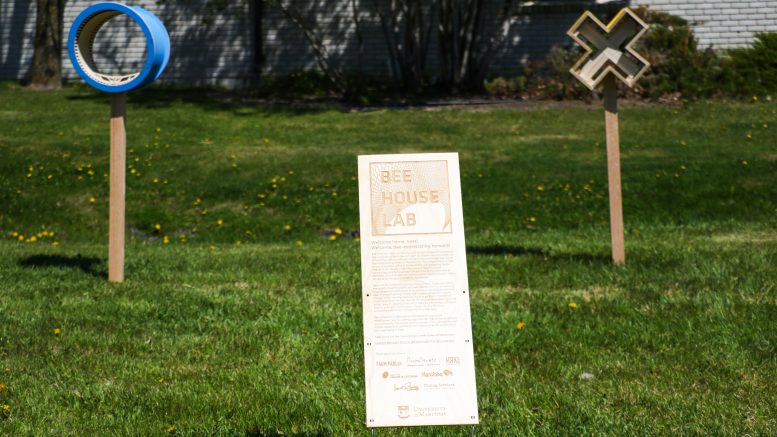 Two example of be houses for the Bee House Lab project at the Glenlea Research Station. Photo by Megan Colwell

The University of Manitoba’s innovative efforts to save solitary bees were appreciated with a campus sustainability award presented over the Thanksgiving weekend.

The Association for the Advancement of Sustainability in Higher Education (AASHE) awarded the U of M’s BEE/HOUSE/LAB international bee house design competition with a Campus Sustainability Achievement Award for outstanding achievement and progress toward sustainability.

The U of M competition, which launched in March, challenged competitors to design houses that can host between 80-100 solitary nesting bees. The pollinating insects are suffering from dwindling populations.

Andrew Konowalchuk, the U of M’s associate vice-president administration, noted that the AASHE only recognized three universities out of more than 220 entrants and said the award “showcases one example of many great projects being realized by our university community.”

The U of M was recognized in its category alongside Cedar Valley College in Dallas, Texas and Furman University in Greenville, South Carolina.

Since their inception in 2006, AASHE Campus Sustainability Awards have been presented to educational institutions that promote effective implementation of campus projects that contribute to sustainability.

Anna Weier, engagement coordinator in the U of M’s office of sustainability, welcomed the award.

“It is great to be recognized as a leader of sustainable development by an international organization,” she said. “This project is reflective of the fact that we often work collaboratively with on- and off-campus partners to create innovative environmental solutions.”

The winning designs, announced in April, were fabricated by the U of M’s Fab Lab, the faculty of architecture’s laser cutting labratory. Field testing began in the spring with the installation of 50 bee houses by the U of M Parks Canada Club student group.

“The bee houses themselves are gorgeous and make our campus even more attractive,” she said. “And of course, there is now more habitat for solitary bees on campus.”

At the end of October, the field test will wind down when the bee houses are collected and their practical designs more thoroughly evaluated, which includes taking a count of how many bees are nesting inside.

Robert Currie, a professor of entomology at the U of M, said the competition served as a showcase for the university’s sustainability office and its efforts on campus.

“I think that the bee house competition will bring an awareness of the university’s roles and [efforts] to make the campus a sustainable environment and also to use the campus as a living lab,” he said.

Currie, who is actively involved in the field testing of the bee houses, said it is especially rewarding to be recognized by an outside organization.

“I think it is a great honour to receive the award,” he said.

“The project in itself has been a real collaborative project and very multi-disciplinary […] Everybody that has been involved in it has really devoted a lot of time and effort to the project and believed in that project, so it is very nice to receive that sort of award and recognition from outside the institution.”

Daily Bread Cafe one of the best kept secrets on campus