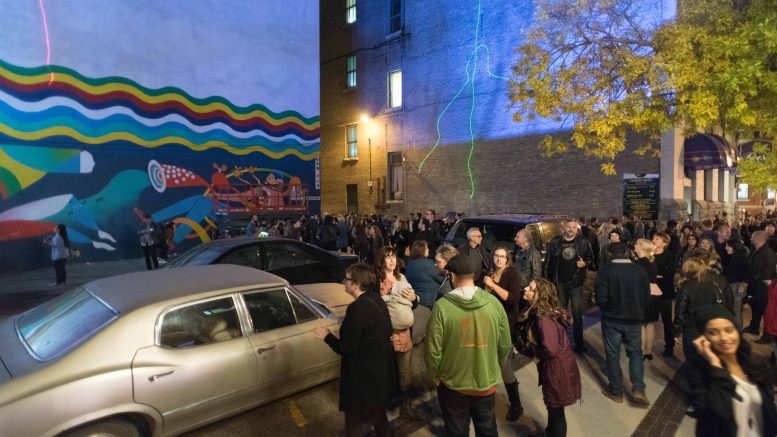 Winnipeg’s potential was once again realized during one of the city’s largest events of the year, with events that stretched through downtown, the Forks, the Exchange District, and St. Boniface. Nuit Blanche is celebrated on the first weekend of October in places all over Canada and Europe including Paris, Brussels, Rome, and Madrid.

Nuit Blanche was the highlight of the three-day-long Culture Days event that took place simultaneously across Canada in major cities like Montreal, Calgary, and Halifax, to name a few. Nuit Blanche Winnipeg opened the streets to artists of all types, creating a pop-up museum of sorts featuring back-lane galleries to roof top concerts.

Touring the Exchange District, the streets were littered with a harmony of cars, pedestrians, and cyclists at volumes that could dizzy a typical Winnipegger. Walking from one exhibit to the next was nearly impossible in a group of people because party members would be roped in by a smile or embrace of a friend or acquaintance before you arrived at your desired destination.

One of the biggest draws of the night was the rooftop concert on top of restaurant Deer + Almond. The live performance of band Beth was intriguing and mesmerizing. The singer dangled his legs over the edge of the building, swayed in the light that projected 30-foot shadows on an adjacent building, and danced with various parts of disassembled mannequins while looking down at the hundreds of people in the parking lot leaning on cars and each other.

The festival is littered with hidden gems that, without an event guide, are guided by advice, intuition, and signs placed outside various venues. After hiking four flights of stairs at a nearby building on McDermot, we arrived at Emergence: Kaleidoscope Café by artist Sandra Krahn. The exhibit features many pieces featuring cut out butterflies and light sculptures as well as oversized kaleidoscopes that projected evolving stained glass images on the walls. The butterflies were used to symbolize missing and murdered Aboriginal Women in Canada and the artist encouraged the audience to provide written feedback on the exhibit and stay for tea and bannock.

Head in the Clouds by Alexander Grant and Naomi Ratte was easily stumbled upon, as it was an exhibit people were drawn to, possibly through subconscious childhood glee. The exhibit was an alleyway filled with illuminated balloons that resembled clouds and flickered to an orchestra of sounds. Standing on benches allowed the participants to view the exhibit from over top of the “clouds” and the contrast of billowing white balloons and cold brick was quite beautiful.

The most stunning piece of art at the exhibit and, judging by the social media attention, the most popular installations had to be CLOUD and The Deep Dark, both created by Caitlind r.c . Brown and Wayne Garrett.

The Deep Dark was a series of illuminated doorways that guide participants along a pitch-dark river path. Experimenting with the light and dark and the eerie nature of not knowing what is on the other side of the doorway until one passes through was both exciting and beautiful.

CLOUD is an instillation that was located between the Human Rights Museum and the Esplanade Riel, arguably two of the most well-known pieces of Winnipeg architecture. The playful and interactive instillation featured 6,000 lightbulbs that could be controlled by pull strings that were so long they almost brushed the floor. The sculpture was meant to symbolize hope and optimism. Weather is something that can be understood regardless of culture barriers and it was meant to be an installation enjoyed by all, collectively looking up with wonder and amazement.

Nuit Blanche opens the streets of Winnipeg to the people that want the city to thrive. People of all ages flock to see art, music, performances, and friends in parts of the city that are oozing with culture – from galleries and venues, to historic buildings and private studios. The city embraces the festival and provides the energy to have a thriving event that will certainly be a highlight for many for this year and in the years to come.