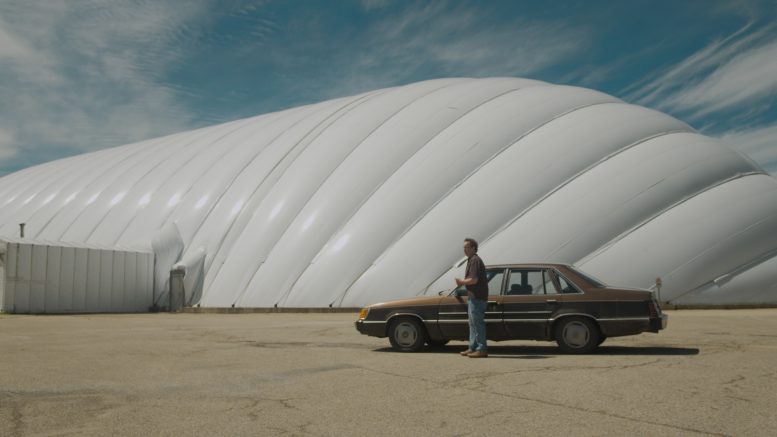 Music videos are usually regarded as mere commercial endeavors. While they often are, this is not the case with Forever, the new music video by Winnipeg artist AudioOpera (whose real name is Graeme Barrett).

Codirected by Graeme Barrett and Avery Stedman, Forever stars Kevin McDonald of The Kids in the Hall, and tells a story of the story of a divorced dad-type who, after finding a mysterious business card on his car windshield, goes on a short journey of self-discovery. This brief journey gives a bittersweet and sarcastic glimpse into the sad realities post-divorce males must face while navigating loneliness in 2016.

The video, which was released in September, has been featured on MuchMusic TV and been awarded a Vimeo Staff Pick. This kind of acclaim has not only expanded AudioOpera’s fanbase but also his musical credibility and Stedman’s videography.

View counts do not always validate the essence and peculiarity of music videos such as AudioOpera’s. By making it to television, onto the Vimeo Staff Pick list, and having been featured on a number of top music blogsites, Forever has gone through some of the most vigorous selection filters.

Being listed on the Vimeo Staff Pick means the music video is not just a follow-up to a song but a short film piece in its own right. With their directorial efforts being recognized by Vimeo and MuchMusic TV, AudioOpera and Stedman will be hoping to use their platforms to raise funding for more films.

“We are not living off of our art by any means, but it is a nice validation of what we have been doing and committing all our time to,” AudioOpera said.

AudioOpera is a Winnipeg artist signed to the New York City-based record label Noise Collective. As the name of the label suggests, its artists produce associative music using found sounds. Instead of using pre-made samples in their songs, Noise Collective’s artists use field recordings – recordings of sounds like kicking a door, the blowing wind, the slamming of a trash can – and manipulate them to become elements of a song, like a kick drum, a keyboard track, or synths.

AudioOpera’s new EP, Flying From The River, was created this way. He incorporated some guitar into the EP for cohesiveness, and added vocals for a humanizing touch.

Most of his music is melancholic, somber, and with an otherworldly feel. This pairs well with the overall tone and style of the Forever video. Stedman and AudioOpera wanted to create their own world within Winnipeg, and give the video a desert sci-fi, desolate feel.

Winnipeg has many odd old buildings, nooks and crannies, and open planes of space, which enabled the directors to set an eerie, mysterious tone to their film. There is a sense of isolation that permeates the video, evoking the theme of loneliness explored through the narrative.

AudioOpera does not create music and videos for financial compensation. He releases all of his music for free online, or on a pay-what-you-can basis. AudioOpera wants his listeners to enjoy his music and help spread the word about his work. He will be touring with Hot Sugar, the producer and founder of Noise Collective, in 2017.

AudioOpera’s newest EP, Flying From The River, is available for streaming on Soundcloud. The EP will be available for free digital download in the near future. CDs will also be available for purchase. Visit his Facebook page for more details: www.facebook.com/AudioOpera

Of stars and sapphires

The habit of hoarding