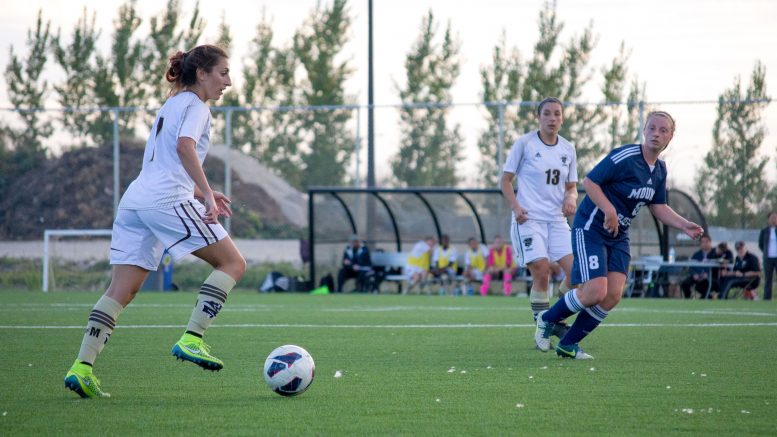 If you head over to the soccer fields at the U of M when the Bisons women’s soccer team is playing – which you should, by the way – you will be able to witness the brilliance that is Selina Speranza. The five-foot-two forward is a wizard on the pitch. Whether she is dashing through opposing backlines like a hot knife through butter or dribbling past a fullback to drive in a pinpoint cross, she is a thrill to watch.

Speranza has enjoyed a lot of personal success this season, scoring five goals in 12 games and tacking on two assists. She averages 4.64 shots per game and wreaks havoc on any defense she comes up against.

“I think I have been playing better than I ever have. I guess I am in my prime,” Speranza said, laughing.

“I would have preferred to score a couple more goals in the last couple games but I think overall I have been playing well, and I think all the girls really just play for each other.”

Speranza, ever the team player, loves her Bison teammates, going so far as to say that they are her family.

“They’re almost like my first family, because we’re always together,” she said.

In particular, an on-field relationship between Speranza and midfielder Amanda Wong has become a deadly one, as both seem to be in on each other’s goals.

“We trained together in the off season. We just look for each other,” she said. “We know each other’s runs and what’s expected of our positions. Me and Mandy go way back – we have a lot of fun together.”

Speranza’s time with the Bisons is quickly coming to an end, however, as she is in her fifth and final year playing with the herd.

“It’s been my life – everything revolves around soccer,” she said. “It’s probably more than a full time job but I absolutely love it, it’s my life.”

Life after the herd is something that is becoming real for Speranza and she plans on finishing her bachelor’s degree in psychology but still has soccer on the brain.

“I don’t know about soccer, it’s hard to say,” she said. “I’d love to try out for some teams, but I kind of need to make some money.”

Some of her favourite moments with the Bisons have been emotional ones. Speranza points to every time the Bisons scored a last minute goal as some of the best memories she’s had.

“Those last minute goals really bring us together, they’re pretty emotional,” she said. “That’s been my favourite part, when we pull together as a team and get a late goal.”

Speranza has been a part of two Duckworth Challenges held at Investors Group Field and it has been a great experience for her and the Bisons.

“It was honestly so exciting for us as a team to play at a former World Cup venue,” she said. “We are all pretty pumped up. It’s probably the biggest game of the season for us.”

Before the Duckworth Challenge, the Bisons each gave a rose to someone who has inspired them not only in soccer, but also in life. This year, Speranza gave her rose to her brother.

“This year I gave it to my brother because he’s gone through a lot,” she said. “We’ve helped each other out the past couple years. He’s always been there for me, especially with soccer.”

There is still a season to be played however, and with two games left, Speranza is optimistic that the Bisons can host a playoff game.

“I definitely think we will make the first round of the playoffs and then we’ll go from there,” she said. “We have a strong team; we just have to finish the chances that we make for ourselves.”

The Bisons wrap up their regular season this weekend, and whether or not the Bisons make the playoffs, teams in Canada West will breathe a sigh of relief when Speranza walks off the field for the last time at the CIS level.