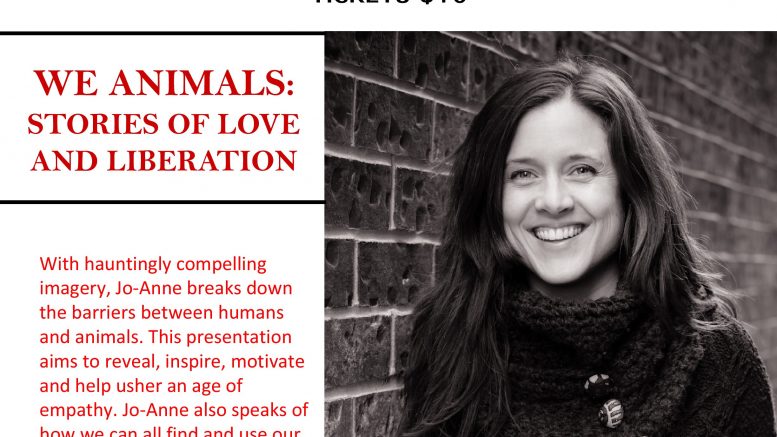 Twenty years ago, Canadian photojournalist Jo-Anne McArthur realized that she regarded animals differently from the way most people did. While backpacking in Ecuador, she came across a macaque monkey on display and chained up in a window. Tourists were taking photos of the monkey like it was just another curio, but all she could see was an animal suffering and in bondage.

Since then, McArthur has been trotting the globe, photographing and documenting the stories of animals everywhere. She has garnered a name for herself by portraying the world’s ‘invisible animals.’ These animals are absent from the covers of magazines and the shelter of our homes but present on our dinner tables, confined in factory farms, hunted and neglected. Her work seeks to introduce city-dwellers to individual animals and their stories.

Our society allows us to humanize pets and exotic animals. These photogenic animals are featured on the covers of magazines and news feeds worldwide. Whenever they are mistreated, there is an outrage. On the other hand, non-domestic and factory animals are easily neglected and regarded as means of making profits.

Animal activism has allowed for more scrutiny into the way factory animals are treated. This has led to an increase in demand and appreciation for vegan products. As a result, meat-producing companies are beginning to produce animal-free alternatives as a result. While these are commendable strides, animal activists have more work to do to raise awareness for about animal mistreatments.

That being said, McArthur’s new book, We Animals, tells the stories of individual animals through photographs and anecdotes. The book has been endorsed and critically acclaimed by the likes of Dr. Jane Goodall, Wade Davis of National Geographic, and Joaquin Phoenix.

On Oct. 25, she will be giving a presentation entitled We Animals: Stories of Love and Liberation at the Park Theatre. The presentation will be hosted by the Winnipeg Humane Society’s farm animal compassion committee

With her presentation, McArthur intends to take the audience on a journey across the globe, introduce them to animals, and help them conceptualize and understand the marginalization that animals face at the hands of human beings. She also seeks to inspire young people to use their skills and passion to change the world, as she did with photography and animal activism.

“It is definitely a tear-jerking talk, but it is also full of really joyous moments. I am basically sharing stories of rescue, so it’s heart-warming,” McArthur said.

When she is not giving presentations, or taking pictures, McArthur spends her time working on two upcoming books. The first is called Captive and is a collaborative project with the Born Free Foundation. Slated for an April 2017 release, Captive focuses on zoos around the world and the need for a paradigm shift in terms of captivity.

The second book, Unbound, commemorates the role of women in animal activism and is expected to be out in 2019. In this book, McArthur narrates the stories of activists including elephant rescuers in Thailand and lawmakers in Canada. For more information on her book project, visit unboundproject.org.

Jo-Anne McArthur’s presentation on We Animals: Stories of Love and Liberation will be held Oct. 25 at 7 p.m. at the Park Theatre. Tickets are $10 and can be purchased online, at the Winnipeg Humane Society’s gift shop, or at the door. For more information, visit www.myparktheatre.com or weanimals.org