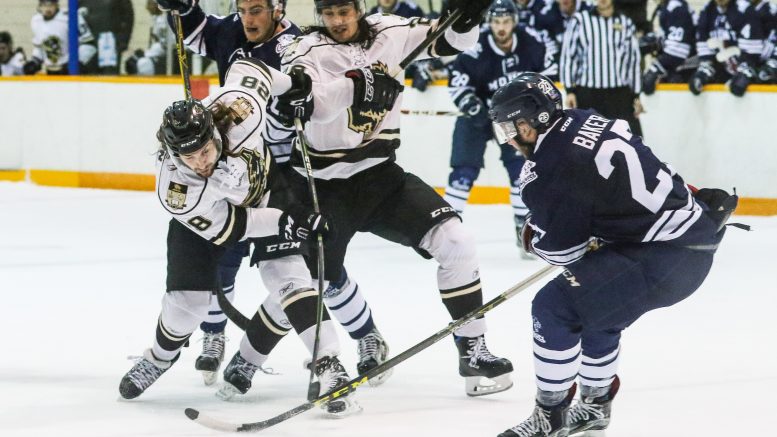 This weekend, the University of Manitoba Bisons men’s hockey team played a two game series against the Mount Royal Cougars. The Cougars took a close game on Friday night by a score of 3-1 and dominated on Saturday afternoon with a massive 5-1 win.

The Bisons are now 0-2 on the year, despite a successful pre-season. Bisons head coach Mike Sirant was disappointed with the way this season started for the herd.

“It’s not the way we wanted to start the season, that’s for sure,” he said after Saturday’s loss. “Preseason and regular season is a whole different ball game, as we discovered.”

Coming into Friday night’s game, the Bisons had not won a home opener since the 2009-10 season. It started out well for the herd, as they struck first with Justin Augert scoring just five minutes into the opening frame. Taking advantage of a miscommunication between Cougar defenders, he rushed in alone to put the home team up 1-0.

Power plays turned out to be the Achilles heel for the Bisons, as they found themselves shorthanded seven times in the game. The Cougars managed to get the tying goal on one of their man-advantages in the second period through Connor Rankin.

The second period was riddled with penalties, as both sides took some undisciplined penalties.

Mount Royal jumped ahead late in the third period, again on the power play, off the stick of defenseman Jesse Lees. The Cougars put the icing on the cake with an empty net goal from Cam Maclise in the final minute of regulation.

Sirant talked postgame about the penalties that ended up costing the Bisons the game.

The game was close all the way through, and the Bisons managed to generate many chances. Both teams were laying the body early and often.

“We did create some good offence,” Sirant said. “We created some really good scoring chances. We just have to find a way to put the puck in the net.”

The Bisons were looking to rebound from Friday’s disappointing loss. The game got off to a lackluster start as both teams looked a bit tired after Friday night’s physical affair. Both teams struggled to get pucks out of their own end, with lots of bouncing pucks and miscued passes.

The Bisons found the back of the net first at the halfway mark of the first period. Remi Laurencelle finished a beautiful feed from Shaq Merasty on the rush.

The Cougars applied some furious pressure and were rewarded minutes later after they worked a great cycle in the corner that ended with six-foot-four forward Bill Marshall burying the puck past Bison goalie Justin Paulic. They added to their lead after Rankin made a dazzling rush into the Bisons’ zone, getting past defenseman Garret Johnston with ease. He then cut across the crease, dragging Paulic with him and, showing great patience, finished top shelf on the sprawling Bison goalie.

It would get worse for the home team, as the Cougars would make it 3-1 late in the first after a 2-on-1 was broken up, and the puck was stuffed in by rookie forward Jamal Watson.

The second period saw a rise in physicality, with Nick Zajac throwing his body around for the Bisons, generating some big hits. Rankin would score his second of the game two minutes into the period after picking up a loose puck at the half wall and taking it to the net, firing low-blocker side on Paulic.

In the third period, the Cougars would continue to keep their foot on the gas and apply their relentless forecheck. Watson got his second of the night 12 minutes into the third period to put the final nail in the Bisons’ coffin.

“That’s Mount Royal, they work very, very hard,” Sirant said post game. “They don’t take shifts off and they gave our defensemen a lot of trouble.”

The Bisons head out on the road to play the Regina Cougars in a two game series on Oct. 21-22.