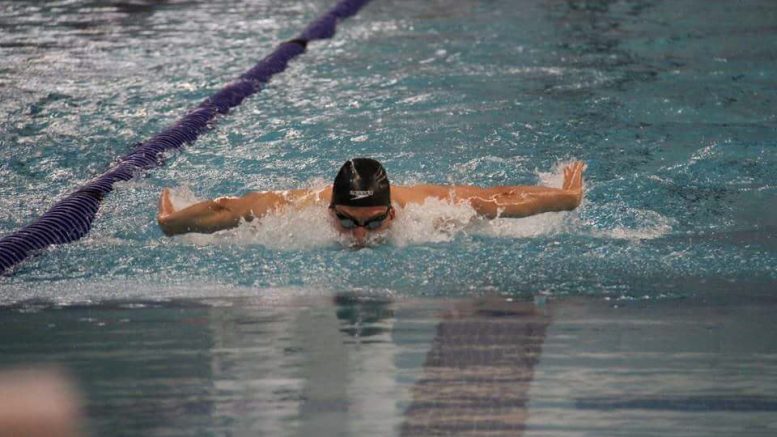 The Bisons swimming team introduced a pair of swimmers at a press conference last week: 18-year-old Kelsey Wog and 19-year-old Alex Shogolev. Both swimmers bring a wealth of experience to the team and will be able to make an impression at the CIS level very early.

After a successful summer, Wog is looking forward to getting started with the Bisons.

“I have increased my goals and I just want to push myself every day to see how fast I can get,” she said. “I just want to train as hard as I can.”

Having been so successful at such a young age, Wog has been able to stay humble and true to herself, and she thanks her family for that.

“My family helps with [staying humble]. I just have good roots with them,” she said. “I don’t make a big deal of things. I just kind of take it and say, ‘wow, this is cool’ and move on.”

Wog also swam in the 2016 Junior Pan Pacific Championships in Maui, HI as well as competing in the Canadian Olympic swimming trials. She clocked a time of 2:25.42 in the 200m breaststroke, which was the 20th fastest time in the world in that event.

At the Olympic trials, Wog brushed shoulders with Penny Oleksiak, the high schooler who won four medals at the 2016 Olympics in Rio.

“I think the coolest event I’ve competed in was the Olympic trials,” Wog said. “[Oleksiak] is outstanding and it’s always amazing to see people like that succeed.”

Shogolev has his own personal accolades to bring to the table, including four podium finishes at the 2015-16 Canada West Swimming Championships when he was with the Calgary Dinos. He also broke the provincial record in short course 50-metre backstroke and in the 100-metre butterfly for the 15-17 age category in 2014.

After four years with the junior Bisons and one year with the Dinos, Shogolev decided to come back home.

“I just missed the team,” he said. “Vlastimil Cerny is a great coach and he knows what he is doing, and my results have been really good here.”

With a year of CIS competition under his belt, Shogolev feels he has improved in different events.

“Going over there, I knew that the practices were a little bit different so I went more into the 200-metre freestyle event and improved a lot,” he said. “The 100-metre is my main event and I will be looking to improve on that here.”

Shogolev had high praise for Cerny and his approach to coaching, which he credits as making it easier for him to come back to swim for the Bisons.

“He’s a very reliable coach, he really knows what you need,” he said. “We know what we need to be improved and we’re hoping to get that done this year.”

Both Shogolev and Wog are products of the junior Bisons program, and Cerny said that both recruits will be able to make their presence felt with the Bisons.

“Alex will be a strong leader with the men’s team,” he said. “Kelsey will be a force at the CIS level – we expect some big things from her, and from Alex as well.”