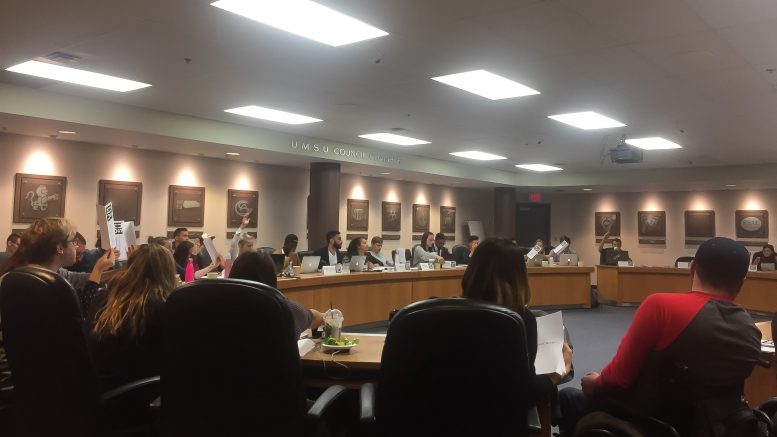 In total, the fees will amount to a $15.9 million contribution to the university over the next 10 years, although only a fraction of that amount – $2.4 million for new daycare spaces – will be directly administered by the university.

The remaining fees, amounting to roughly $13.5 million, will be managed by UMSU and count toward the Front and Centre campaign in name only.

Background of the fee hike

The fee hike passed in a November 2015 omnibus motion that sparked questions on whether the increase should have been put to U of M students in the form of a referendum.

Then-UMSU president Jeremiah Kopp rejected that notion, pointing to support from other U of M student leaders and an online survey the executive had done as sufficient consultation for the raise in fees.

The final vote on that motion had 25 councillors in favour, two against, and six abstentions.

The motion debated at last week’s council meeting, forwarded by UMSU’s executive committee, granted the executive the authority to sign an agreement with the university regarding a donation to Front and Centre.

The motion follows negotiations between UMSU and U of M Front and Centre officials on how to allocate the money toward the four initiatives the fee hike was approved to fund.

Arts Student Body Council (ASBC) representatives voiced their uncertainty over the merits of handing over student money to the Front and Centre campaign during an hour-long question and debate period.

ASBC representatives Serena Gawryluk and Andy Fenwick argued that students had not been adequately informed of the student-funded donation.

During the meeting, Fenwick referred to council’s ability to hand over millions of student dollars to the university without adequate consultation as “barebones democracy.”

In an email to the Manitoban, Gawryluk expressed her frustration with the wording of the motion.

“Trying to pass off a 10-year compulsory student fee as a gift or donation from students to show support for the university’s Front and Centre campaign is misleading and not an accurate depiction of how these funds actually came to be raised,” she said.

UMSU council did ultimately pass the motion, but not until after accepting an amendment proposed by ASBC president Isaac Weldon to change the wording of the agreement – barring any contractual legal issues – from “gift agreement” to “contribution agreement.”

In terms of the name change, Gawryluk said, “I felt that this wording eliminated the risk of being deceptive and instead was more accurate and truthful, which made me more comfortable with it.”

Gawryluk eventually voted in favour of the motion. Fenwick went on to abstain from the final vote on the motion.

“I believe this year’s UMSU executive is truly trying to make the best of an inherited and inherently flawed motion from last council and that they are trying to partner up with the university, where appropriate, in order to foster a positive and mutually beneficial working relationship,” Gawryluk said.

Following the meeting, UMSU president Tanjit Nagra spoke to the Manitoban about the debate at council.

“I appreciate any opinions from councillors. I appreciate everyone doing their job and expressing concerns and questions from people they represent and the student body as a whole,” she said.

On the motion’s approval, Nagra said, “I think this is an excellent opportunity to work with the university […] and I’m really happy that we’re ensuring that student money is going back to students.”

Details of the agreement

The terms and references of how the $10 million earmarked for indigenous student bursaries and undergraduate research funding will be allocated is still under negotiation; however, in the council meeting, UMSU executives indicated that the U of M office of financial aid and awards (FAA) will distribute that money.

In the meeting, Nagra insisted that working with FAA to distribute those awards, scholarships, and bursaries will ensure that the money will be allocated to students in an unbiased manner.

Monthly meetup for the municipally-minded