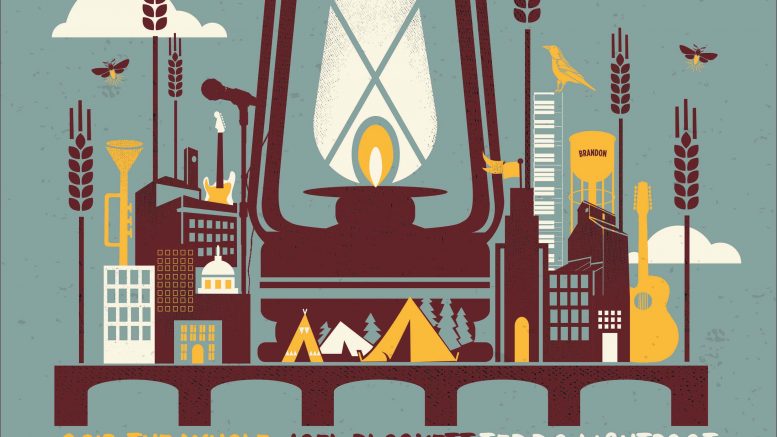 On Sept. 10, the city of Brandon will play host to the first-ever Summer Lights music festival. From 12 p.m. to 12 a.m. at the Keystone Centre Grounds, festival attendees will be presented with a showcase of local indie music.

Festival director Dylan MacDonald says that the festival is an extension of the city’s Summer Lights concert series. The series, usually a once-a-month free concert with accompanying music workshops, had been in existence for several years before the expansion into a full-blown festival.

Though Brandon has an annual folk festival, MacDonald says that the Summer Lights festival still explores uncharted territory in the city.

“I do think that it is the first of its kind in that it is a little more indie rock. We’re trying to cater a little more to a younger demographic. I think it’s cool to introduce smaller communities to indie music – and I mean that in a sense of the true, independent, and up-and-coming music.”

MacDonald is dedicated to establishing Brandon’s musical reputation. As a musician himself and as a member of Brandon band the Middle Coast, he feels that a festival of this scale will only improve the city’s music scene.

“A lot of touring acts that are coming through just aren’t stopping in Brandon for various reasons, but I think that this will help with that – having more music coming through Brandon all the time,” he said.

Tyler Bancroft, guitarist and vocalist for headlining act Said the Whale, can speak to the Brandon skip-over.

“We’ve toured Canada maybe like 25 or 30 times across the country, and we’ve never played in Brandon. That is to say, we’ve never hit Brandon as a stop on our tour [because] maybe there isn’t a go-to indie venue there. Maybe there’s not much of a scene,” he says.

Bancroft, like MacDonald, sees the festival as a good opportunity for Brandon to assert themselves as a spot for touring musicians to play.

“Obviously there’s a population in Brandon and there’s young people in that population, and young people generally want to see live music. Young people in Brandon must feel a little starved for cool music to see. A summer festival like Summer Lights is of course nurturing that. A music festival is going to stimulate our musical economy,” said Bancroft.

Bobby Desjarlais of Winnipeg’s Attica Riots, who were recently nominated for a 2016 CASBY Award for best new artist, says that stimulating the music scene in small cities is only going to improve the overall music scene.

“If every small town has a thriving music scene, it’s only going to make the cities even more so. That’s what feeds a city. I mean, I’m from Beausejour. It’s not like everyone’s born inside a city and that’s who makes the music,” said Desjarlais.

Desjarlais pointed to the Tragically Hip’s emergence from Kingston, Ontario as an example of what smaller cities and towns have to offer.

Bancroft, who is thousands of kilometers away in Vancouver, about to record vocals for the upcoming Said the Whale record, agrees with Desjarlais.

He noted that the Canadian music scene is “very inclusive” with a “uniquely Canadian” sense of camaraderie.

“I think it probably just comes from an understanding that a success for one Canadian band is beneficial to the success of all Canadian bands. Everyone’s trying to build a good reputation for the country, and we’re lucky that everyone realizes that working together is the best way to achieve that,” said Bancroft.

The carefully-curated lineup reflects the support for Canadian music.

“I think [Summer Lights] did it right; they’re leveraging everyone’s opportunities properly. It’s still going to be a great show for Said the Whale, but obviously it’s going to be a great day for a young Brandon band to get up onstage with them and see that level of professionalism,” Desjarlais noted.

“We’ve been lucky to be able to boast a good lineup for year one. We’ve been working pretty hard to make it awesome,” said MacDonald.

Tickets for the Summer Lights music festival are $15 for students, $20 for general audience and can be picked up at Little Sister Coffee Maker and Music Trader. For more information, visit summerlightsmusicfestival.com