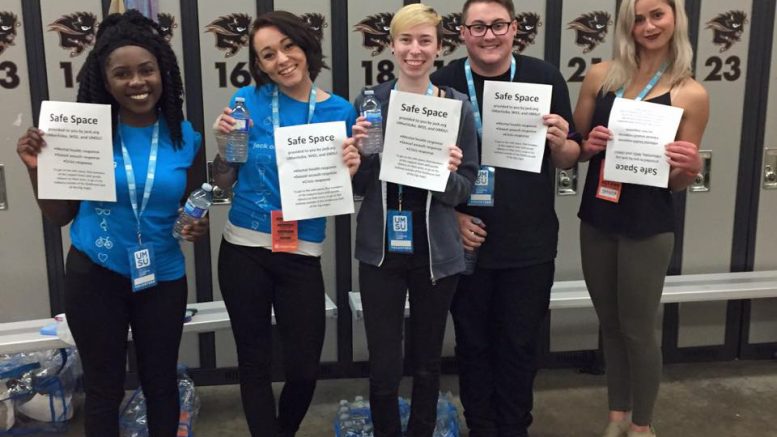 Students who organized a safe space during this year’s Frosh Fest are calling for the University of Manitoba Students’ Union (UMSU) to bring a permanent and universal safe space to the U of M.

Aly Raposo, a women’s and gender studies student who organized a safe space at Frosh Fest on behalf of the student union and Jack.Org – an organization dedicated to dealing with mental health issues on university campuses – said she believes it’s time for a permanent space to be introduced to the university.

“The resources there need to be inclusive to all,” Raposo said. “[They] need to be addressing sexual assaults, depression, or anything that would bring somebody into a safe space.”

“Primarily it’s a space to go if you need to get away,” she said. “That’s what I want everybody to know about.”

Prior to this year’s Frosh Fest, UMSU vice-president student services Jessica Smith approached Raposo to form a group of volunteers and create a safe space at the festival’s Sept. 18 headline event.

Raposo gathered a team of four volunteers – two to stay in the safe space to help anyone who came in, and two to walk around with purple ribbons to assist anyone feeling uncomfortable or overwhelmed – and began advertising the service.

The day before the festival, an UMSU executive asked Raposo not to share the advertisements, leading to public criticisms that the student union worried more about Frosh appearing safe than promoting the space. “We wanted to make sure that we weren’t promising things that wouldn’t be there,” UMSU president Tanjit Nagra said.

“One of my concerns was the issue of the sexual assault response that was mentioned. From my understanding, I don’t think we [UMSU or Jack.Org] have people trained to [deal with] that.”

Jack.Org programming manager, Sarah Mughal, told the Manitoban that student volunteers for the organization do not receive training to deal with sexual assaults.

However, Mughal did say, “Sometimes students in our network have that [sexual assault response training] separately, but our program does not provide that training.”

Raposo openly criticized the union in an article by the CBC, saying UMSU was suppressing the advertisements so students wouldn’t get the idea Frosh was unsafe and calling the union executive’s actions “rape culture at its finest.”

Nagra defended the executive’s actions, saying Raposo was asked not to heavily promote the space due to confusion over what exactly the safe space would provide for students.

“When we weren’t sure what exactly the safe space would entail, we didn’t want to promote it not knowing the full details,” she said.

Despite the confusion, Raposo insists the space was successful.

“I really do appreciate the fact that [UMSU] did allow us to have this safe space and they were really thankful afterwards because it was most definitely needed,” said Raposo.

The event’s eventual success, Raposo said, is proof enough that the union should invest in creating a permanent, universal safe space on campus.

University safe spaces are places that students of certain genders, races, or orientations can visit if they are feeling bullied, unsafe, or uncomfortable on campus.

Currently, the University of Manitoba has student support resource centres and safe spaces specifically for women, members of the LGBTTQ* community, indigenous students, and those living with a disability – but no universal space.

Raposo referenced the mental health struggles she herself faced in her early years in university and the feeling of not having somewhere to go on campus. In her second year, she dropped out of classes due to anxiety.

Nagra said that she – or any other UMSU executive – has yet to be approached by any student willing to take on the task of organizing a universal safe space on campus.

“If there’s a very passionate student who wants to take this on, we’re happy to work with them,”she said. “If they feel that it should be an executive looking into this, by all means, ask someone to. Or even just set up a meeting.”

Johise Namwira, last year’s assistant women’s liaison to the Arts Student Body Council (ASBC) and a volunteer at Frosh Fest’s safe space, said, “People need to know that there are resources available and that there’s a place you can go.”

“We don’t always know when people will need it,” she said, “but it’s always good to have something that’s prepared in the case that we do need it.”