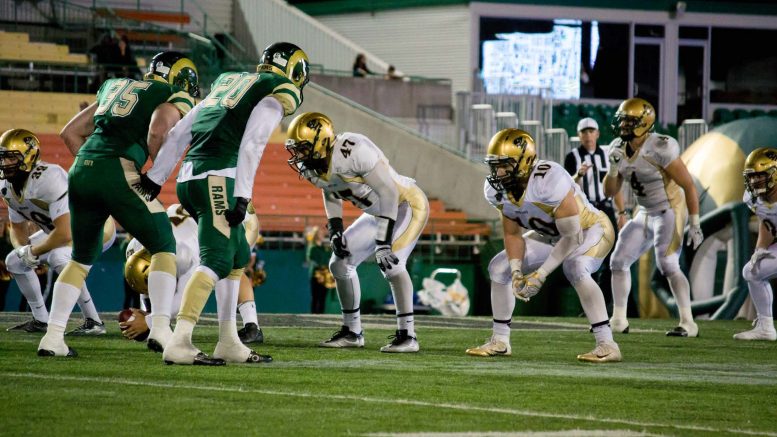 Bisons vs Rams by Chantal Zdan

The University of Manitoba Bisons let an 11-point fourth quarter lead slip away against the Regina Rams, falling 41-38 on the road Thursday night.

The herd looked to have the game all wrapped up after linebacker recovered a fumble deep in Regina territory and took it all the way to house with just 4:37 to go, but the Rams kept on fighting. First, Picton drove 87 yards in 11 plays, finishing off the series with a one-yard plunge to cut the lead to five, and then the hosts got a massive play from their defence.

With the Bisons deep in Regina territory, Korey Greene stripped the ball from Manitoba running back Alex Christie, and the Rams were able to recover.

It was all Picton after that, as the Rams offence went 104 yards in the final minute, capping the drive with a 15-yard Picton toss to Schienbein to complete the upset over the previously #8 ranked Bisons.

Statistically, both quarterbacks had impressive numbers, coming alive in the second half specifically. Manitoba pivot Theo Deezar finished 30-of-49 for 457 yards and two touchdowns, but also threw two interceptions.

Picton had a marvelous game, going 40-of-60 for 490 yards and four touchdowns, and distributing the ball to seven different receivers, five of whom had at least 60 total yards.

Shai Ross was the leading receiver for the herd, finishing with four receptions for 126 yards in what has quickly turned into a patchwork receiving corps for the Bisons. Manitoba is currently missing six offensive starters, including receivers Kyle Patchell, Devin Csincsa, Stephen Ugbah, and Derek Yachisonthree of whom were major offseason recruits. Also missing on offence were veteran offensive linemen Tom Clarkson and Jordan Medal.

Defensively, Manitoba’s secondary was also depleted heading into the contest, as cornerbacks didn’t make the trip.

Manitoba’s next two games are both at home, and will be critical in determining where they fall in the standings towards the end of the year. This week they play host to the Alberta Golden Bears and will follow that up with a tilt against the Saskatchewan Huskies. Alberta and Saskatchewan have both improved significantly since 2015, and both games should be relatively competitive.

The Bisons’ next game is at Investors Group Field against the unranked Golden Bears at 7:00 p.m. on Friday.