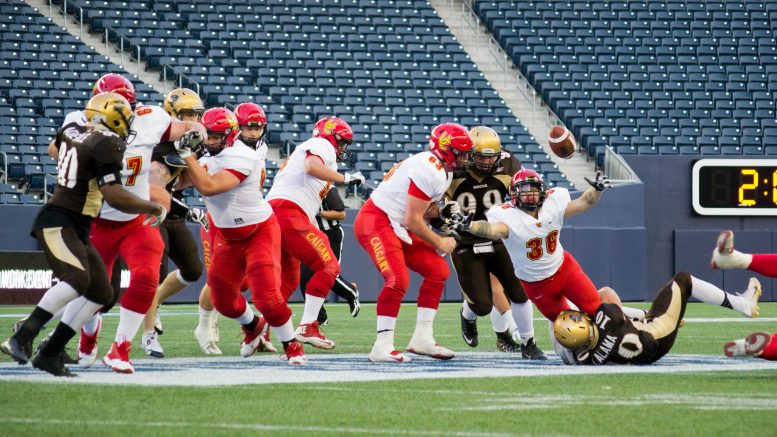 Discipline was the story in week one for the University of Manitoba Bison football team as they fell 23-14 at Investors Group Field against the Calgary Dinos.

The herd surrendered a total of 18 penalties for 193 yards – generated mainly off of illegal procedure, holding, and no yards calls – causing a lack of sustained momentum offensively which cost the Bisons, specifically in the latter stages of the fourth quarter.

“Our issue was focus, our issue was being tired or being too lazy on a repetition,” head coach Brian Dobie said postgame in reference to the near 200 yards in penalties taken, as well as the mental errors his squad made throughout the contest.

The home side moved the ball well on their opening drive – getting down to the Calgary 18-yard line thanks to a few key plays from slotback Jesse Walker – but were unable to fully capitalize, as kicker Ryan Jones missed from within the red zone, resulting in just a single point.

The remainder of the first half was a defensive slugfest.

Manitoba took a 4-0 lead after linebacker DJ Lalama forced a fumble which was recovered by fellow linebacker Bami Adewale. Unfortunately, the herd could only produce three points on the ensuing drive, despite starting at their own 50-yard line. This was again due in part to discipline, as Bison quarterback Theo Deezar had trouble handling a second-down snap at the Calgary six-yard line and was forced to dive on the loose ball.

Calgary then moved the ball 66 yards on their next drive, before getting stuffed at the Manitoba nine-yard line, forcing a field-goal.

The prehistorics’ defence held strong, however, causing the Bisons to concede a safety on their following possession to take a 5-4 lead into halftime.

Once again, the herd’s opening drive – this time in the second half – generated hope. Deezar was able to connect with Walker in the endzone to retake the lead 11-5, after starting at the Calgary 32-yard line thanks to a Donovan Gregoire forced fumble.

Unfortunately, that was as good as it got for Deezar and the troops, as the starting pivot threw three second half interceptions. The last interception shifted the momentum permanently in the Dinos’ favour, as they drove 38 yards in six plays on the ensuing possession to take a 22-11 lead – one that Manitoba couldn’t recover from.

Despite a less-than-spectacular performance where Deezar went 23-of-39 for 278 yards, he still held high optimism for his team post-game.

“I was a little off assignment-wise and through my read progression, but that’s something that we can work on with the coaching staff,” Deezar said.

“It’s the first game of the season. We have a long season ahead of us. If we quit now we’re not going to have a good end, but if we can learn from every single mistake then I think we have a phenomenal football team that has a lot of heart.”

The Bisons’ next task is Regina, as they head on the road to face the Rams at 8 p.m. CT on Thursday, Sept. 8.

Greatness emerged out of failure

The best in the Canada West