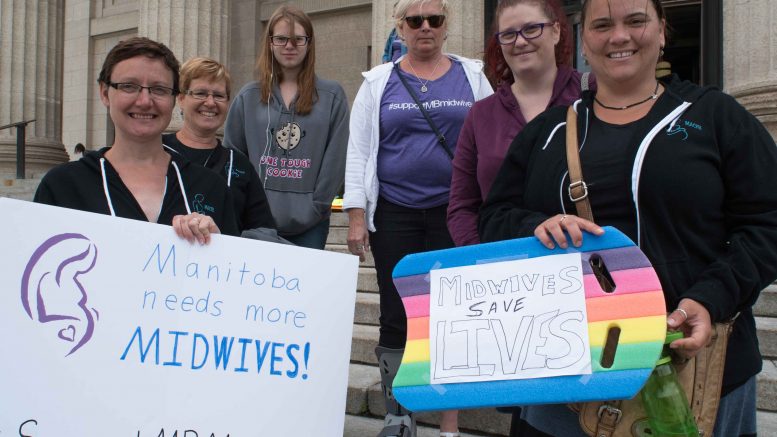 Following protests about the cancellation of Manitoba’s only bachelor of midwifery program, the province and the University of Manitoba have announced a new plan to allow stranded midwifery students to complete their degrees.

The new plan, announced Aug. 5, involves a partnership with McMaster University, which offers Canada’s oldest midwifery training program. Students who have completed the first year of the joint University of Manitoba-University College of the North (UCN) midwifery program will be enrolled in the second year of McMaster’s program and have their UCN credits transferred.

A modified fall term will bring the students up to Ontario standards to move into clinical placements. The program will be delivered entirely in Manitoba, with the U of M providing academic support, offering clinical courses and labs taught by its own instructors, and hosting McMaster courses online.

“Information is slowly trickling out,” she said in an interview. “We’ve just basically had enough time to do the basics of registering.”

“Everybody’s on a time crunch, right? If you think about it, we’ve all got three weeks to do everything that people have four to six months to do. We haven’t had a big giant sitdown. There really isn’t time to do any of that. It’s basically, we’re just sitting here refreshing our emails, and as we get instructions we’re reading them out and figuring them out.”

Since the announcement in late June that the U of M-UCN program would not run in the fall, a lot has changed, Larner said.

“Definitely a roller coaster this summer,” she said. “I’m happy to have a little bit of resolution. You know, as students we’re all happy to have a solution that works for everybody and that we’re going to be able to resume our studies.”

Education Minister Ian Wishart said in June that “there will be a program in place” for the current midwifery students in the fall. In a provincial release, he said the McMaster partnership fulfils that promise.

“This new partnership will ensure the midwifery students in Manitoba who have already invested significant time and effort toward their studies can complete their coursework uninterrupted,” said Wishart in the release.

“We are proud to follow through on a commitment that was made and I commend our partners for their hard work in reaching this resolution, which will help meet the growing demand for midwives in our province.”

In a June 23 committee meeting, Wishart implied he favoured training nurses with additional midwifery credentials rather than standalone midwives.

“The nature of filling [the need for both nurses and midwives in the north] might change from midwives alone, stand-alone midwife positions, to something that is more an evolution of nursing,” he said.

The provincial NDP criticized the cancellation of the midwifery program, emphasizing the impact it would have on remote northern communities.

“When you talk to people in northern Manitoba, one of the top overall health priorities that they have consistently identified is returning birthing to their communities,” said Wab Kinew, the NDP education critic, in a June interview.

For now, the new partnership means the end of midwifery education at UCN. The northern university is not involved in the new arrangement between the U of M and McMaster.

“UCN is no longer offering a midwifery program, with no plans to do so in the near future,” said Jim Scott, UCN’s director of communications, in an email.

In a statement, a spokesperson for the provincial NDP expressed concern that UCN was no longer a part of the midwifery program.

“While it is important that the needs of existing students are met to ensure continuation of their studies, it is very concerning that it appears existing programming for northern students will no longer be funded.”

“It is important that the demand for midwifery services among indigenous and northern communities be met.”

The program was suspended during the 2014-15 academic year, while a new intake of students was planned for 2015-16. These students were to be the first cohort of a new joint midwifery program between the U of M and UCN to be delivered in Winnipeg with annual intake of students and clinical placements around the province.

However, the new faculty, staff, and academic supports required for the second year of the joint program would have cost an additional $844,000, meaning its provincial funding would have to nearly double. While the previous NDP government committed this money as an election promise, the new Progressive Conservative government did not provide for it in their first budget in May.

Without enough money to operate the joint program, and with the standalone program no longer recognized by the College of Midwives of Manitoba, the regulatory authority for midwifery in Manitoba, the province was briefly left without any viable option for training midwives. The 14 students who had completed the first year of the new program were left stranded.

With a new program now in place for the fall, Larner is hopeful for the immediate future.

“I’m hoping that this is the stepping stone. Now that we’ve been able to get out of the limelight, settle down into some classes and studying and now that this big immediate emergency is over, that the plan is to continue to focus on the long term solution,” she said.

“We need an education program here in Manitoba. We can’t just stop at short term. And I don’t think we as students will be just letting it go now that we’ve got our own class. Until all women can say that they have a choice and they have an option to birth how they want to, I don’t think we’re done here in terms of pushing for it.”

Larner said the partnership with McMaster University, which has run a midwifery program since 1993 and already operates collaborative programs at Laurentian University and Ryerson University, makes for a promising future.

“I’m hoping that it will be more of a positive thing, partnering with someone who has been running a successful program for a long time. That can do nothing but boost the program, whether they intend to remain a partnership or whether it’s going to be a standalone program. It’s anybody’s guess at this point.”

Manitoba Greens petition to get in debates