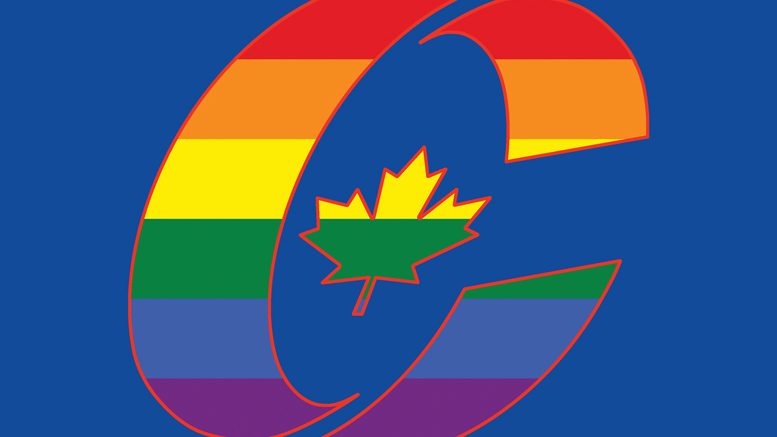 “I think I’ll look back on this moment in my political career, in my life, as something that was really transformative and really awesome,” Conservative MP Michelle Rempel told reporters last Friday at the party’s biennial national convention in Vancouver.

‘Transformative’ is a fitting word to describe the atmosphere at the Vancouver Convention Centre last weekend. Rempel, in her excitement, was referring to a closely won vote by delegates to bring a discussion and motion on ending the party’s traditional definition of marriage to the convention floor.

For decades, the official position in the party’s policy guide was that marriage was between one man and one woman, a stance that has caused rifts between younger, more progressive party members and older, more socially conservative ones.

In a 1036 to 462 vote the next day, the resolution passed and the divisive language was dropped from the constitution. This, despite the fact that same-sex marriage has been legal in Canada for over a decade, has conservatives all over the country buzzing. The Conservative Party of Canada, which in the past staked out a platform based on traditional Christian values due its deep Reform Party roots, has just taken a big step to the left. But is this action significant enough to reconcile the more socially liberal faction of the party? And is the party going far enough to support the LGBTTQ* community?

Out with the old, in with the new

Later that same Friday night, former prime minister and Reform Party alum Stephen Harper stood behind the podium in front of thousands of supporters, staff, and delegates to give his final farewell to active political life. The official end to an era that defined Canadian conservatism had finally arrived.

Harper announced his official resignation as an MP and thanked the party for ten long years of unwavering support. He then waved his final goodbye and rode off into the proverbial sunset… or into the Conservative party’s fundraising office, where he will now serve as a director.

With the former prime minister’s departure, the delegates and MPs were finally able to breathe. The time to begin the rebuilding process after falling from a decade of power in Ottawa had come.

For the next two days, the Vancouver Convention Centre was filled with a range of discussions on controversial social policies, loud arguments about the party’s future, excited delegates bustling to and fro, and something the party has not been used to for over a decade: reporters. Everywhere. You know things have definitely changed in the Conservative ranks when MPs are lining up to speak with journalists rather than vice versa.

The Tories have not, however, thrown all of their fervent social conservatism to the wind. In votes following the one on same-sex marriage, delegates overwhelmingly supported a resolution to ensure “conscious rights” to medical practitioners who do not want to perform abortions or medically assisted suicides. Delegates also elected to have civilian gun ownership enshrined as an aspect of “Canadian heritage.” These kinds of policies are to be expected from the right-wing grassroots members of a party that is doing some serious soul-searching at the moment.

What was not expected, however, was the impassioned and exuberant reactions that many of the party’s bigwigs, such as Michelle Rempel, Jason Kenney, Kellie Leitch, Michael Chong, Maxime Bernier, and Peter MacKay – all officially or prospectively vying to replace Stephen Harper at the party’s head – expressed toward the controversial and frankly stale conversation about the party’s renewed approach to marriage.

“We are a party of equal opportunity, we are a party that is inclusive,” Leitch, who has already thrown her hat into the ring for leader of the party, told the CBC.

“It’s about freedom and respect. It’s about us and telling Canadians that you can love who you want and that you can be in love,” Bernier said to delegates in a speech on the issue.

These assertions coming from members of a party that took a woman to court for wanting to wear a religious head covering during her citizenship oath speak volumes. On social issues at least, the Conservatives may be coming to the realization that, overall, Canadians are a lot more progressive then they took us for last October.

Despite this newly minted support for same-sex couples and their revived passion for discussing social issues, the Conservative party is still way behind the rest of Canada on LGBTTQ* rights. With new transgender rights legislation on its way to Parliament, the ‘party that is inclusive’ must find itself on the right side of history and support the proposed laws.

Unfortunately, there are already Conservative senators threatening to kill the legislation with the same absurd justifications that Republicans in the U.S. are using over trans “Bathroom Bills.” It will take the combined effort of the Conservative party’s most influential members, such as those who excitedly supported the acceptance of same-sex marriage, to ensure that the party has any legitimacy when it calls itself the party of equal opportunity.

It has taken the Conservatives over ten years to come to terms with same-sex marriage and they have suffered for their tardiness. If they do not learn the lesson that Canadians want to live in a country that values inclusiveness, compassion, and equality for all, then the Conservative party will continue to have trouble climbing out of the pit Harper drove them into last October.