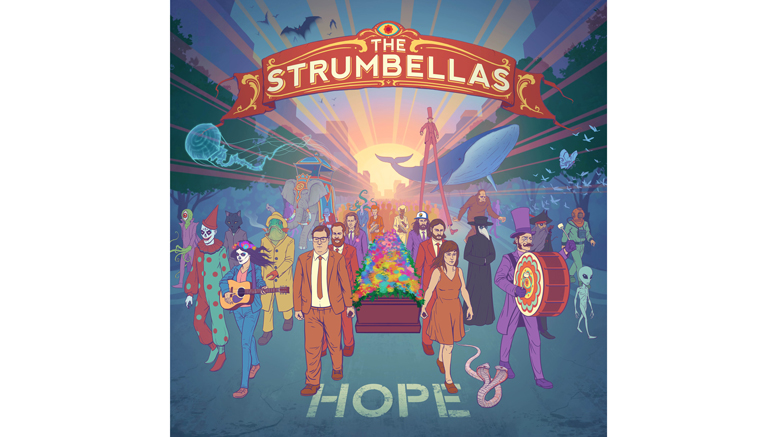 If you’ve tuned into mainstream indie/alternative radio in Canada at all lately, there’s a pretty good chance you’ve been bombarded by The Strumbellas’ latest single “Spirits.” Stations like Winnipeg’s own 99.1 Fresh Radio have been bumping this tune like no one’s business – and with good reason. It’s a great song that encapsulates the best things about the genre, with a real earworm of a chorus. Even if it was your first time hearing that song, you were probably singing “I’ve got guns in my head and they won’t go, spirits in my head and they won’t go” by the end of it.

The Strumbellas seem to know how much they excel at this brand of commercial, folksy indie – and they play it up to great effect all over Hope.

Ward’s vocals are at their best on “Shovels & Dirt” and “Wars,” with “Wars” specifically featuring an unexpected break before the penultimate chorus that features a harmonized chant of “There’s a soldier, soldier in my mind” against nothing but muted acoustic guitar, drums, and a snare roll that rhythmically apes a military snare march – it’s a sudden, drastic break that makes the drop into the song’s last refrain sound absolutely immense.

Other highlights from Hope include “We Don’t Know” and “Young & Wild” – both of which give the more driving, indie-rock-influenced folk of bands like Shred Kelly and Boy & Bear a run for their money with jangling electric guitar riffs set against swelling synthesizer washes (unlike most contemporary indie groups, these are kept in the background, and thankfully don’t overtake the entire mix).

It seems there’s a significant impetus on indie bands today to do something ever so subtly different with their sound – to do something sufficiently weird enough within the constraints of their genre so as to stand out amongst the pack.

It’s refreshing to hear that The Strumbellas have done anything but that on Hope – this is a band very comfortable with their identity as an ultra-sleek, radio-ready indie-folk band, and it’s an identity they’ve leaned into hard, and executed incredibly well on this release. Make sure this one’s in your CD-changer for the long drive out to Folk Fest this year.