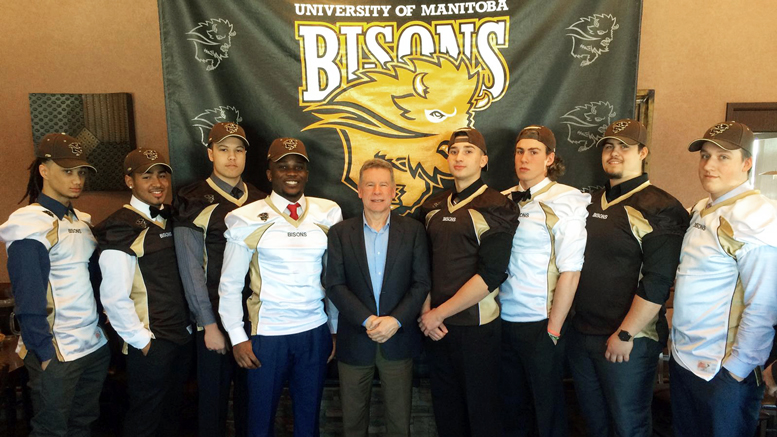 With Bisons football spring camp quickly approaching, the Manitoban decided to take a positional look at some of the new recruits entering the fold and what they’ll be bringing to the table for the herd both this season and in the years to come.

To say that the Bisons are loaded at the pivot position would be an extreme understatement. With Theo Deezar, Foster Martens, Julian Wytinck, and Billy Hart already in the fold (granted, one of the latter three may be headed to the Rifles), Manitoba went out and added even more talent by nabbing two of the top quarterback prospects in the country in local product Colby Kyliuk and Alberta native Des Catellier.

Both players are sure to redshirt this season, but represent the future for the herd in two-to-three seasons. Each individual is naturally athletic and can make plays both inside and outside of the pocket. Kyliuk has the size, a slightly stronger arm, and an effective three-step drop. But Catellier is the more well-rounded pivot, displaying tremendous accuracy and rarely making mental errors due to his diligent film study. It’s going to be exciting to see how these two elite prospects develop in their time at the U of M.

As usual, head coach Brian Dobie recruited hard on the offensive line, continuing to prove why the Bisons have the most depth in the conference when it comes to the trenches.

In securing Anthony Daley and Aarmin Purewal, Dobie was able to get two junior football veterans who can step in and play immediately. Tack on Tom Clarkson – a University of Nevada-Las Vegas grad and older brother of fellow lineman Matt – and Manitoba will have an interesting battle on their hands to see who can slot into the starting five. Matt Kaneski – the best offensive lineman in the WHSFL this past season – will probably redshirt but provides even more reliability for the future.

Granted, Reid McMorris, Matt Clarkson, and Zack Williams will all have something to say as to who steps in and starts due to their experience as current members of the squad.

With three open positions at wide receiver, the incoming recruiting class will have a chance to mimic what Jesse Walker did last year and start immediately.

Kyle Patchell, a veteran of the Okanagan Sun, headlines the crop of talent entering the mix. He has previous experience playing with Theo Deezar during their time with Okanagan and will provide valuable leadership for a young group.

Aside from Patchell, Manitoba went out and got arguably the two best local products from 2015 in Conor Nedelec and Liam Grace. Nedelec’s greatest strength is his ability to use his body to his advantage to get inside positioning on defenders and, if groomed properly, he could be a very effective wideout in a few seasons.

Grace was unquestionably the best receiver in the province this season, and does everything right. He runs every route effectively. He’s sneaky, athletic, and fights for every ball. He’ll likely redshirt in 2016 but has a strong future ahead of him.

“Arguably the best receiver in the WHSFL, Liam brings his experience to our program looking to fill a void,” said Bisons assistant recruitment co-ordinator Francesco Principe. “I had the privilege to watch Liam play countless times and it was not hard to tell that he was a leader and an outstanding athlete. He runs great routes and is a very smart football player.”

For the most part, Manitoba is sitting pretty in the front four – specifically at defensive end. It’s borderline impossible to replace a game-changer like David Onyemata, but Coach Dobie did an effective job of finding a few prospects who could develop into stars on the interior side of the line.

Six-foot-four, 300 pound defensive tackle Brock Gowanlock out of the Langley Rams junior football program will be leaned on as the primary replacement for Onyemata. Named as an All-Canadian after recording a CJFL leading 14.5 sacks in 2015, Gowanlock has a combination of speed and power than should fit well into Manitoba’s defensive system.

Local product Bojan Stevanovic is a player who stands out because of his versatility. He played on both sides of the ball and could slot in at either tackle or end. He’s a fierce worker with a relentless attitude and high motor.

“Bojan is a big addition to our program. At six-foot-three, 290 pounds, he brings his versatility as he played on the offensive and defensive line at Miles Macdonell,” Principe said. “In the past Miles Mac has produced great players and I can’t wait to see what Bojan can transition into.”

Out of all the players signed for 2016, B.C. native Demarius Henderson is probably the one I’m most excited to see perform. He may not see action in 2016 due to the cluster of talented players already slotted in at defensive end, but the sky is the limit for the future. Henderson’s speed-power combination is nothing short of impressive and much like Stevanovic, he’s a tireless worker.

Marcel Arruda-Welch and Keenan Onyebuchi are the future for the herd in the secondary. Again, both will likely redshirt in 2016, but with Cam Teschuk’s time coming to a close and Tyler Fong’s CFL draft year quickly approaching, it won’t be long until both are slotted into the starting lineup.

Arruda-Welch has been the best athlete in the province for two straight years and was unquestionably the top DB this season.

“Marcel was easily the most entertaining player to watch when he had the ball in his hands and we are ecstatic to have him as a Bison. It will be fun to watch him develop,” Principe said. “Out of the entire group of recruits Marcel can make an impact in our program immediately.”

Onyebuchi is a proven winner and his positivity and drive are impossible to ignore.

“I’m very happy to have Keenan as a Bison. He brings his athleticism and leadership to our program and will certainly develop into an outstanding athlete and adult,” Principe said.

“Keenan was the best safety in the WHSFL and has proven he’s a winner with two straight championships in the WHSFL and MMFL. After getting to know Keenan personally, you can tell he is a confident young man whose ceiling is limitless.”

Playoff seeding on the line in football season finale