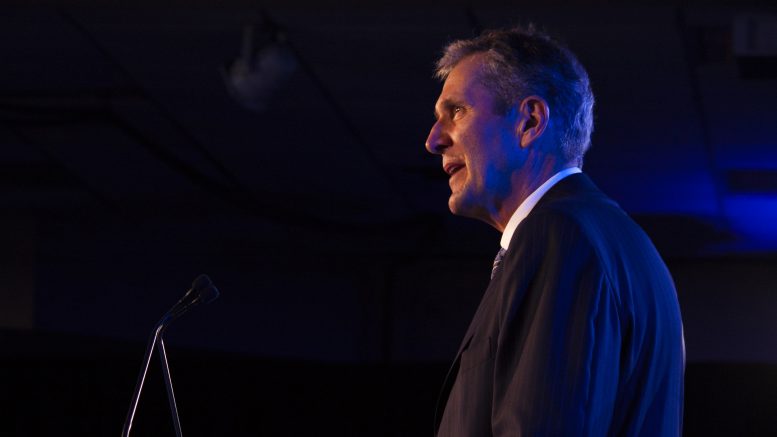 The Progressive Conservative (PC) Party of Manitoba swept the 2016 Manitoba general election Tuesday, adding 21 seats to their previous 19 for a 40-seat majority.

The party’s traditional base is in rural southern Manitoba, but the Tories made advances in Winnipeg in addition to sweeping Brandon, Selkirk, Thompson, Gimli, and the Interlake. Along with their new gains, the PCs held on to every district they won in 2011.

The PCs will form the largest majority government Manitoba has seen since 1915, when 40 Liberal MLAs were elected to a legislature with 47 seats.

The New Democratic Party (NDP), which has held a continuous majority since 1999, was reduced to just 14 seats from 35. Several long-time NDP MLAs were not re-elected to their seats.

The Liberals nearly doubled their support to 14.2 per cent, while the Greens climbed to 5.2 per cent from less than three.

NDP leader Greg Selinger, who was re-elected to his St. Boniface seat by a wide margin, announced his resignation as party leader in a concession speech. He thanked volunteers and carried the weight of the failed campaign.

Selinger said he will honour his constituents and maintain his seat in the legislature for the time being.

The Liberals made new inroads, winning in three districts after years of holding only one seat in the legislature.

Party leader Rana Bokhari fell to third place in the hotly contested Fort Rouge district which was claimed by the NDP’s Wab Kinew.

The Green Party of Manitoba did not win a seat, but they came in a close second in Wolseley to NDP incumbent Rob Altemeyer. The Greens also made a strong showing in Fort Garry-Riverview, where leader James Beddome squared off against NDP incumbent cabinet minister James Allum.

The Manitoba Party and the Communist Party did not win in any district, shutting them out of the legislature entirely.

See which MLAs will be taking their seats for the districts surrounding the University of Manitoba.

Pallister to be premier 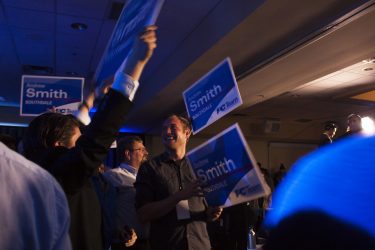 In his first campaign at the helm of the Manitoba Progressive Conservative Party, Pallister led the party to a strong majority government and will take over the province’s top office.

The PCs more than doubled their seat count in a campaign aimed at reducing taxes and government spending.

“We will retain doctors, not export them with higher taxes,” he said to a raucous crowd gathered to celebrate the party’s first win since 1995.

“You deserve a paramedic at your door; you don’t deserve a $500 bill in your mail,” he added.

Pallister was criticized by the Manitoba chapter of the Canadian Federation of Students late in the campaign for failing to respond to questions from the student organization surrounding its post-secondary policy planks.

The PCs announced in March a plan to boost the Manitoba Grant and Bursary Initiative to $20 million largely through private donations but wouldn’t comment on tuition rates or keeping interest off provincial student loans. They also did not answer a question posed by the Canadian Federation of Students about legislation requiring universities to maintain standalone sexual assault policies.

After failing to lead the New Democrats to a fifth consecutive majority government, Selinger, who took over as party leader in 2009, pointed to the party’s accomplishments over more than 16 years in office.

He noted the province’s nationally low unemployment rates, increased day care spots, and efforts toward reconciliation with indigenous peoples as party highlights to take pride in.

“We fought hard. We’ve worked together, we’ve gone through a number of challenges but we came together as a team in this election,” he said.

“We put forward a positive vision for Manitoba. We challenged things that we disagreed with but is now my responsibility to offer my resignation to the president of the party.” 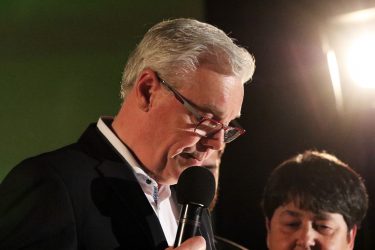 Greg Selinger steps down as NDP leader after the party faced a decisive loss Tuesday night. Photo by Megan Colwell.

Selinger’s command of the party was brought into question in the fall of 2014 when five cabinet ministers resigned saying they had lost confidence in his leadership. He eventually held on to his position by a slim margin after winning a leadership race over former minister of health Theresa Oswald by 33 votes in March 2015.

“You do have lots of things that you wish you could have maybe done better,” Selinger told a media scrum after announcing he was stepping down.

“You do have ways you could have approached it differently. You know what, I think about these things but I also, as I said in my speech tonight, I think about what we’ve accomplished as a province. It’s a good place to be.”

Bohkari, who took over leadership of a party that held only one seat in the legislature in 2013, told reporters she plans to stay on as leader and her tenure is a conversation for another day.

“We’re going to continue working, but again, we all knew this was going to be tough,” she said. “Nobody walked [blindly] into this. I’ve been at it for three years and believe me, it’s never been an easy go.”

The Liberal campaign struggled with candidates throughout the election and lost five in one week in late March but Bohkari said the party ran as strong a campaign as resources allowed.

“We had a tough game,” she said. “We’re running with zero dollars, a fraction of the resources, there’s a lot of negativity, but we had fantastic candidates, we had fantastic volunteers, we did what we could with what we had, and that’s it.”

About a quarter of people who voted in the election did so by advanced polling for a total of 109,000 – a new record for Manitoba.

This election saw advanced polling stations set up at six post-secondary institutions across the province.

About the same number of people cast advance ballots on-campus in the 2011 election.

Jeremiah Kopp, outgoing president of the University of Manitoba Students’ Union, reacted to the election results.

Kopp said it is “too early to speculate” whether tuition will increase under the new government.

“I think we have to wait and see what the new government is going to do on issues that are important to students. So we’ll see what kind of budgets they come out with and what kind of priorities they hold for education. But one thing is clear: it’s going to mean that a lot of lobbying and conversations will have to take place over the next little while.”

The University of Manitoba issued a release late Tuesday noting nearly one-third of candidates in the election are U of M alumni. At least half of elected MLAs studied at the U of M. President David Barnard also noted the crucial role provincial investment play on university campuses.

“The relationship between universities and the provincial government is a critical one as we rely upon provincial funding to educate and train the skilled labour that our provincial economy needs,” said Barnard in a release.

“In addition, the provincial government provides much-needed support for innovation and infrastructure, which enhance our ability to attract and retain faculty and students, whose research improves the quality of life both here at home and abroad.”

The Manitoban spoke to some U of M students who were on campus at the Hub to watch the election.

“I’m a little disappointed,” said Jonathan, a political studies student. “I was hoping for an NDP minority to be honest. I just don’t trust Brian Pallister. I think there is a reason Manitobans voted a certain way 16 years ago to remove the PC government and I think the PCs are going to bring the province back from the steps the NDP have tried over the past 16 years.”

Adam, a kinesiology student, was “kind of disappointed but not surprised.”

“I was expecting a Conservative minority,” he said.

There were 2,462 rejected ballots, up from 1,604 in the previous election. These are deemed by an elections official to be invalid or improperly marked. They do not count toward the total voter turnout and cannot be safely interpreted any particular way.

Kewatinook had the highest number of rejected ballots at 120, while Fort Garry-Riverview was lowest at 13.

In addition, there were 4,017 declined ballots. Manitoba is one of only four provinces – the others being Ontario, Saskatchewan, and Alberta – that allow voters to write “declined” across the front of the ballot. Declined ballots count toward the total voter turnout and are counted as a vote for no particular candidate.

The total number of declined ballots is up tenfold from last election, in which 440 ballots were declined. Declined ballots represented nearly one per cent of the popular vote. The unusually high total this time around could be explained in part by media coverage of the option to decline a ballot. In addition, some experts suggested Manitobans were unsatisfied with their options, citing high numbers of undecided voters immediately in advance of the election.

This article is being updated periodically with new information.

The path to premier