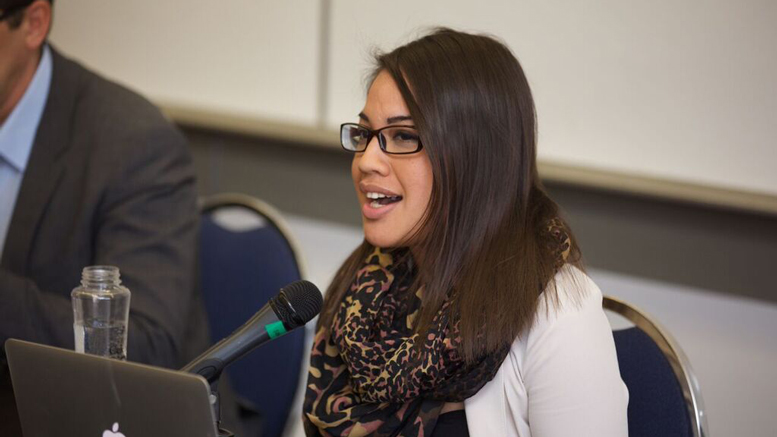 A candidate on the UMSU For You University of Manitoba Students’ Union (UMSU) executive slate has come under fire for comments posted on Facebook in 2012.

Ashley Richard, current president of the Association of Aboriginal Commerce Students and candidate for UMSU vice-president student services, published a post to her Facebook account in September 2012 that has been called anti-Semitic in its reference to the Canadian Museum for Human Rights.

“There’s so much damn traffic everywhere. But let’s not build a highway, let’s spend millions on the construction of a Jew History Museum. Good job,” reads the post.

The museum, which was the brainchild of late media mogul Israel “Izzy” Asper and more than a decade in the making, was still under construction when Richard’s statements were published online.

Responding to comments below the initial post, Richard continues: “you can bet it [millions of dollars] won’t be spent on the measly Aboriginal ‘display’ they’re building.”

“[Because] you know, Aboriginals only get one exhibit, even though they are the hugest part of human rights history in Manitoba. Not even just Canada, but right here in our own city. But hey, spend the millions on Holocaust exhibits, as they clearly feel that the 6 million Jewish people who were killed in the Holocaust on the other side of the world is of much more historical importance than the 10 million Aboriginals that were killed right on this very land.”

The posts came to light last week through the anonymous This Is Our UMSU Twitter page accompanied by a statement calling for an apology from Richard and the UMSU For You slate, saying the comments made Jewish students at the U of M feel unsafe.

Richard, a fourth-year student in the Asper school of business, said she is “extremely regretful” about her comments, which were made before she was a student at the U of M.

“I’m obviously not someone who promotes anti-Semitism or an unsafe environment at the university,” she said. “I’m extremely regretful for my poor choice of wording back in 2012. That is not something I would ever say today.”

“I would never, ever, intentionally say anything that would make any student feel unsafe at the university or anywhere and if those comments were taken that way, I’m extremely apologetic,” she added.

Richard emphasized her comments cannot be justified but said they were borne of frustration at a time when she believed there would not be a permanent display recognizing the struggles of Canada’s indigenous population at the museum.

“I was angry, of course. I was angry for my people,” she said.

“Why would they not have a permanent display in that museum, in the Canadian Museum for Human Rights, and that was where that post came from. It was passionate, it was angry, it was unfortunately worded.”

Richard said she has attended and supports the museum, which now has an exhibit dedicated to the Truth and Reconciliation Commission into the Indian residential school system, which operated in Canada for more than a century.

“The comment was not to by any means downplay the severity of the Holocaust,” she said.

Josh Morry, a third-year law student at the U of M’s Robson Hall law school and graduate of the Asper school of business, brought up the comments on Thursday on Ratio, a weekly radio show he co-hosts on UMFM.

He said the comments are concerning not only because they were offensive but also because there was anger behind them.

“What made them so troubling was not the fact she was criticizing the museum, it was the fact that she was attributing what she saw as problems with the museum to the Jews,” he told the Manitoban.

“When you attribute it to the Jews in a way that meets the exact stereotype of the Jews – which is that we’re controlling, we only care about ourselves, we’re wealthy, we’re manipulative – that’s what made it upsetting,” he said.

As a member of the students’ union council himself in 2013, Morry, a Jewish student, was instrumental in decertifying the Students Against Israeli Apartheid student group.

He said Richard has reached out to him since the comments came to light and offered a sincere apology, saying, “We’re in a better place [now] than if she never made the comments.”

“Not that I forgive what she said, but I’m happy now that she understands why what she said was wrong,” he said.

“That is one less person with those beliefs in the world.”

When the museum opened its doors with a ceremony in 2014, protestors demonstrated outside and folk singer Buffy Sainte-Marie, who performed the opening night, called on the museum to use the term “genocide” in describing Canada’s legacy of Indian residential schools.

The museum was criticized in 2015 when a former curator wrote in a book that she was ordered to remove the word from indigenous exhibits.

“She can still be pissed off at the museum, I don’t really care,” Morry said.

“I think the museum wants people to be either angry or happy with it and to stir up those emotions. It’s just [concerning] when people get angry, when they take out their anger on the Jews.”

Tanjit Nagra, current president of the Arts Student Body Council and presidential candidate on the UMSU For You slate, called the comments inappropriate but said Richard still has her support.

“The Canadian Museum for Human Rights is a symbol of reconciliation on several fronts, I believe,” she said. “I’m not going to justify what she said. It was inappropriate of her to say that and she recognizes that, as well, and she has apologized.”

“I know Ashley for who she is today,” she added. “I didn’t know her in 2012. The comments do not reflect her views today.”

A similar controversy derailed then-vice-presidential candidate Christopher Bélanger’s campaign in 2015, when derogatory comments he made three years earlier surfaced in the last week of the campaign. These comments were also released by the anonymous This Is Our UMSU blog.

The result was the election of a mixed-slate executive after Bélanger was the only member of the Your UMSU slate to lose his race.